Classic Love Stories: The Mummy, Dracula, and More. Holding Out For a Hero! by Connie Vines BWLAuthor, #MFRWAuthorsBlog #RandomThoughtsScatteredAbout,


Hello, My Lovelies,
The first week of the Month is
Paranormal/Fantasy or Gothic.
Last month I discussed Traditional Gothic novels and movies.
The Universal Classic Monster movies (The Mummy and The Mummy's Curse are my personal favorites).
As you know, almost every Classic Paranormal, Fantasy, or even Horror movie or story is really a love story.
No! you say?
Think again. 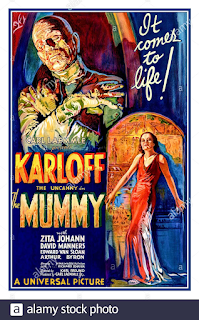 Imhotep (played by Boris Karloff)
https://www.youtube.com/watch?v=3ce2e-d1ZEc (mini film clip).
Karloff played an ancient Egyptian priest called Im-Ho-Tep who was buried alive. After nearly 4,000 years, however, he is brought back to life when archaeologists discover his mummy and read a life-giving spell from a scroll in his coffin. As the contemporary Egyptian Ardeth Bey, he embarks on a quest to reunite with his ancient love. Years later he succeeds in resurrecting her, in the form of Helen Grosvenor (played by Zita Johann). However, Bey’s attempts to transform her into a living mummy fail when the goddess Isis answers Helen’s calls for help and kills Bey.
The Mummy is noted for the eerie and foreboding atmosphere created by Karl Freund, in his directorial debut; an acclaimed cinematographer, Freund had previously worked on Dracula (1931). Also earning praise was the dramatic costume created for Karloff by makeup artist Jack Pierce. The Mummy was part of a trio of horror films (with Dracula and Frankenstein [1931]) that made Universal Pictures famous in the 1930s.
💕 He loved this woman for 4,000 years.
The Remake: 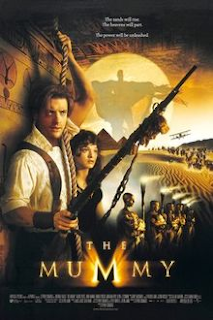 Though I usually cannot sit through extremely violent/gory, movies; I did find the remake of the Mummy movie in 1999, a lively take on a Hollywood classic.  Though, while I enjoyed the humor, I did not like the extreme special effects and the "taking of eyeballs, and scarabs devouring people".
I found it interesting the way this version created a person named Ardef Bay as a protector.  (Arderf Bay, in the original version, was the "human' form of the mummy.)
The Mummy - 1999 trailer

Other gothic novels such as The Vampyre and Bram Stoker’s Dracula have a stronger horror element, as they feature men and women falling in love and becoming lovers with dangerous paranormal creatures. In Carmilla, a young woman is the object of a female vampire’s affection.

Even Star Wars has a prominent romantic subplot. Come to think of it, so do King Kong, Shrek, and Beauty and the Beast.  Let us not forget, Phantom of the Opera. 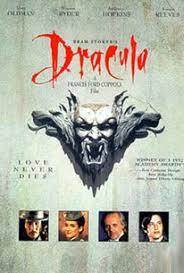 In Francis Ford Coppola’s rendering of the famous Bram Stoker novel, Count Dracula—still reeling centuries later after his wife’s suicide and hell-bent on vengeance against God and mankind—travels to England, where he suspects he has found his wife reincarnated in the form of another woman. Roger Ebert sums up the film’s main paradox: “the vampire shakes his fist at heaven and vows to wait forever for the return of the woman he loves. It does not occur to him that after the first two or three centuries he might not seem all that attractive to her.” Keanu Reeves stars as Jonathan Harker, with Winona Ryder as Mina Harker, Gary Oldman as Count Dracula, and Anthony Hopkins as Professor Van Helsing.

The movie is intensely emotional. You can feel the prince's heartache for his wife. 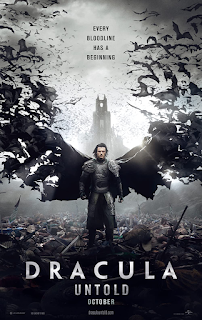 Though this movie did not garner stellar reviews, I found it a more believable take (I know it's  Paranormal fiction) on a mortal's motivation and internal fight to hold on to a piece of his humanity after becoming a monster.

In 15th-century Transylvania, Vlad III (Luke Evans), prince of Wallachia, is known as a just ruler. With his beloved wife, Mirena (Sarah Gadon), Vlad has brokered a prolonged period of peace and ensured that his people are protected, especially from the Ottoman Empire. However, when Sultan Mehmed II (Dominic Cooper) demands 1,000 of the country's boys, including Vlad's son, for his army, Vlad makes a deal with a monster that will enable him to defeat the Turks -- but cost him his humanity.

I'm a sucker for a good love story, what about you? 🧛💞

Do you have a favorite Classic Gothic Love Story?

Thank you for stopping by,