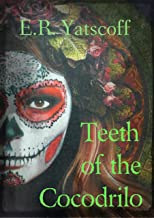 🌟🌟🌟🌟
Aaron, a Canadian fire fighter living in Mexico, risks his life to save a family trapped in a burning car. This event and the events which follow, binds him to a Police commandant which places him in the criminal underworld. The plot twists, love-interest, and well-drawn secondary characters kept me guessing until the final page.
Publisher link:
BWL Publishing Inc
Amazon:
https://www.amazon.com/Teeth-Cocodrilo-R-Yatscoff-ebook/dp/B0747NDPGP
Amazon Bio Page
Barnes and Noble link:
barnesandnoble
GoodReads:
https://www.goodreads.com/book/show/42305859-teeth-of-the-cocodrilo?from_search=true&from_srp=true&rank=7
Kobo: https://books2read.com/Final-Response
https://books2read.com/The-Rumrunners-Boy
Bio:
Edward Yatscoff was born in the Niagara Peninsula and now resides in Alberta, Canada.  He’s backpacked the world, visited six continents, and lived in Australia.  From steelworker to assembly lines to construction work he finally settled down to a 32-year career as a firefighter.
He’s played drums in a Big Band, climbed the Great Wall of China, honeymooned during the Grenada Revolution, snorkeled with a marlin, tried smuggling a Playboy into Communist Russia, egged an Aussie PM, and met his future wife on a freighter in the South China Sea.
He manages a writer’s group, does occasional renos, travels, camps, and reads profusely.  He has written 11 novels YA, MG, and adult crime.  Among his notable awards are winner of the John Bilsland Non-Fiction Award and a Crime Writers of Canada Finalist.
Posted by Connie Vines at 1:00 AM