How We Age - or Does the Mirror Lie?

The subject of aging came up recently in a group I belong to. I had a difficult time turning 50, but since then, aging hasn't bothered me all that much. That year my youngest child left home. For the first time in 50 years I was alone in the house. I had gone from my parents' home to
my husband's. There had always been someone in the house with me even if it was one of my children. Okay, not every minute of the day, but someone always lived there with me. Came home for dinner, slept there, etc.  My husband was on the road, so when my son left, that was it. I was completely alone for weeks at a time.
Of course it didn't take long to get used to doing what I wanted when I wanted and how I wanted. With the exception of being alone at night. I kind of liked it.
Someone else in the group pointed out that for whatever reason, she looked better in the mirror than she did in pictures.

I have to agree for the most part. I mean really, I style my hair - never managed to make it look like the beauty shop did - put on my makeup, and think I look halfway presentable. I attend whatever function 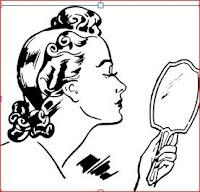 called for my fussing, and inevitably someone takes a picture and posts it on Facebook. Hours later, I see the post and wonder how I could possibly look so bad when I looked so good only a short time before.
Does the mirror lie?
I didn't think it did, because years earlier when I wasn't quite as heavy as I am now, but still overweight, I stayed at my sister in law's cottage. Her bathroom closet had a full length mirror. I never paid much attention to it. I avoid full length mirrors like the plague. 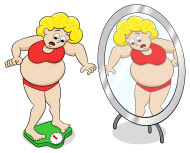 However, upon getting out of the shower one day, I was met head on by a fat naked lady staring at me. Scared the heck out of me, I'll tell you. I couldn't imagine who came in the bathroom while I was showering.
Okay, you're right, I'm not that stupid. But it sure did startle me. I don't mind telling you I wanted to throw a sheet or something over that mirror every time I showered. Instead, I ran the water so hot before I got out, it steamed up the mirror. Problem solved.
We recently bought a motor home (1989 model, quite old, but all we could afford). It has a full length mirror that you can't avoid. I told hubby it has to go. He just laughed at me. One of these days, I will remove it.
Of course that doesn't change the fact that I'm overweight and getting older. But at least I won't have to see it. They say age has its privileges. Wish I knew what they were.
Posted by Roseanne Dowell at 4:30 AM