Autumn is almost upon us 🍂🍁🎃 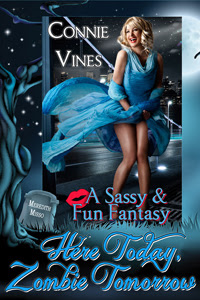 “You and Elvis have done a great job on this house," Meredith said as her older sister led the way downstairs toward the kitchen where the tour began. “Sorry I couldn't get over, until now, but I've been sort of… well, busy."   Slipping her Juicy Couture tortoise-shell framed sunglasses into a bright pink case; Meredith crammed them into her black Coach handbag.  She hoped her sister didn’t ask her to define busy.  Becoming a zombie, and dealing with the entire raised from the dead issue over the past six months, was not a topic easily plunked into casual conversation.

Pippa waved the comment aside. “I'm glad you like it. We had such fun decorating. Of course, we couldn’t do it all at once, but it's more satisfying putting it together treasure by treasure."

Meredith glanced from Pippa’s impish features and short spiky black hair to the perimeter of the room.  Taking in every detail and nuance of Pippa’s decorating talent, she let her gaze rest on a collection of figurines by fantasy artist Jasmine Beckett-Griffith crouching at the top of the ebony stained cabinets.  A black arch-top fireplace mounted against the wall, flames flowing from a bed of clear river stones, and HOME SWEET HOME embroidered on a sampler with a tiny vine of blood-red roses tangling though out the letters completed the focal point of the room.

Even though Meredith was in the best relations with her sister, she couldn't help but feel a sharp nip of jealousy.  It hadn’t been so long ago that she’d had her own happy home.  Unfortunately, she’d filed for divorce from Viktor, and then there’d been that bizarre little accident where she’d ended up dead, and then undead.

While Pippa’s two kids, Ethan and Emma, played in the living room, to the accompaniment of a 1960s rock-and-roll musical on cable TV, Meredith sat in the kitchen with her sister, fiddling with the end of the teabag that dangled from the rim of her China cup.

Since her sister was contemplating the contents of a tin filled with Danish cookies, Meredith found herself cataloging the events that led up her ‘accident’.

A charter member of the SoCal Arts Association, she’d been participating in the annual Zombie Walk Festival in Long Beach when it ‘happened’. Crowds always made her uncomfortable, but this particular event was to raise money, so she was obligated to attend.   And, it only went to reason; this year’s participation broke all past records.

Twelve-thousand gleeful ghouls stormed Long Beach’s renovated Promenade.  The crowd became so large that it spilled out over Pine Avenue for an all-out downtown invasion.  Meredith didn’t recall much about the accident, nor who or what reanimated her.  She remembered overhearing a security officer informing a pungent-smelling zombie that he couldn’t purchase an alcoholic beverage (apparently he didn’t match up with his photo ID). Within moments, a shoving match between the two men ensured, quickly escalating into zombie chaos:  shouting, running, and chomping.

At the time, Meredith thought it was all part of the festivities, perhaps a little odd and definitely crazy.  Just like the cornstarch-based zombie-vomit and fake blood, everyone had globed and smeared on themselves; but hey, it was an Arts event. Even after finding herself wedged in the center of the zombie mob, lunging and bumping along until they were in sight of the pier, Meredith wasn’t overly concerned.

In hindsight, perhaps she should have been extremely concerned.  Because the next thing Meredith knew, she was in a zipped body bag, feeling entirely not like herself.

No.  She wasn’t going to dwell on the past.  Again. She’d just keep muddling on with her life and try to focus on the bright spots.

Pippa and her family were a definite bright spot in her life.

“I wish you would let me help with dinner,” Meredith said, pulling herself back into the present.  “I feel guilty just sitting here doing nothing while you do all the work.”  Being a vegan, Meredith found her transition of zombie-hood, particularly exigent.  Brains, human or otherwise, had never been on her menu—now, protein, in fowl or bovine form was a requirement of her reanimated state.  Difficult though it was, she had to come to terms with the change.  After discovering an underground support group who met monthly in a banquet room of a coffee shop near the I-10, she was thankful she didn’t require human protein like most of the other Zombies.  However, consuming tofu with herbal tea (her lunch before reanimation), she discovered, had unfortunate, and unexpected, side effects.

Pippa, turning from the stove with the pecan pie captured between two oven mitts, shook her head.  “Meri, don’t even think about helping me with the meal.  When Elvis’s mom and dad decided to take a paddleboat cruise up the Mississippi, I thought I wouldn't have anybody but my own offspring to fuss over on Thanksgiving Day.  You just sit there and relax."

"I really appreciate the invitation," Meredith said, glancing out the window to catch a Monarch butterfly pick its way along with a lipstick red hibiscus blossom.  "Cooking turkey for one just isn't my style."

Pippa did a double-take at Meredith’s statement but didn’t comment.  Instead, she said, “You’re welcome to come for Christmas dinner too, you know."

"Thanks, Pippa, but Christmas is out.  I have to finish the new book by February so I'm driving up to Forest Falls tomorrow.  I'll be staying there for a month or so."

"Christmas at the cabin," Pippa mused.  "That sounds nice.   Are you sure you want to be up there all by yourself?"

"I won't be,” Meredith reassured her.  “I'm taking Gertie with me."

"Don't say that when Gertie’s within earshot.  She follows me all around the house in her exercise ball.  We’re BFs."

“Well, I'm glad you could join us for Thanksgiving," Pippa said.