Names, Naming and the Jenny Syndrome. 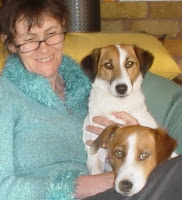 Hello from Tasmania, and thanks to Ginger for her kind invitation.

My name is Sally Odgers, and I am a writeric. (And no, I do NOT mean writerholic, which implies the word writer is really spelled writerhol. Alcohol+ic = alcoholic. Therefore, writer+ic = writeric. Get it? Good.)

I began writing seriously when I was eleven, and won a short story contest. After that, of course, I wrote every chance I got, driving my family nuts with the constant clatter of my Hermes Baby. I wrote my way through my teens; while others of my generation experimented with life, I was creating realities.

In the course of all this writing, I clocked up millions of words and, after nearly forty years, have close to 300 published books. This constant pounding of keyboards left me with a case of chronic tendonitis in both hands, a living, and... a surfeit of Jennies.

When I began writing, my characters had names reflecting those I saw about me. Kids were named Susan, Greg, Jenny, Deb, Emma, Rod, Suzie, Sally Anne and Elizabeth. Parents were dubbed Trevor, Lois, and Peter. As I grew older, the kids became Emily, Jade, Jason, Jordan, Jessica, Justin, Jeremy, Rachel and Anna... while parents and grandparents took on such names as Melly, Charles, Blossom, Juliana and Emma. It was at some point in the 1990s that I realised, when reading over some of my books in preparation for a school lecture, that I had used quite a few of the same names more than once. I went through most of the books and noted down the names and relationships of characters. The resulting list was so breathtakingly huge I put it on my webpage. For interested readers, it is lodged at http://sallyodgers.50megs.com/people.htm

Here is a sample of the horrors I discovered...

In my own defence, I DID use more unusual names too. It was the sheer volume of characters I invented that brought the multiplicity of Jasons (10 of them), Elizabeths (10, ably supported by Eliza x 5, Elissa X 2, and 1 Elisabeth, 1 Elisabetta, and 1 Elizabetha) and Marias (10, plus 1 Marie). They're not all main characters, of course... some are merely mentioned, but there they are, existing in my private library.

Once I discovered the depth of the problem, I made (and still make) a bigger effort at novelty, only to be sideswiped by publishers who changed my Halleys firmly into Kates... (Mind you, they also changed my Toby into an Ella, a Bob into a Bobbi (thus inadvertently implying a lesbian dog) and a Tom into a Tajh...
Posted by Sally_Odgers at 4:39 PM

Sally,
Three hundred books is amazing. I can't even fathom getting that far in my career.

I realize I seem to migrate to the same names, and I wonder why. I've not written nearly as many books and stories as you, but for some reason, I'm stuck on Sarah/Sara. Seems she drifts into every story as the main character, but I end up changing her name. The spirit is the same, only the name changes. *lol*