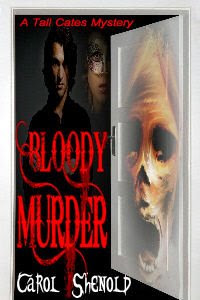 Our Ginger, out celebrating her birthday, has turned her blog over to US. She is brave. We can do anything we want. Hmmmmm. What can I do next? Plotting, plotting, plotting.

I'm Carol Shenold and I write paranormal mystery and urban fantasy. The blog and excerpt below are from my 2nd Tali Cates mystery, "Bloody Murder" available from http://www.eternalpress.com/ right now. The first one, "Privy to Murder is also available. "Fairy Dust" is my urban fantasy about a fairy with flying issues. In January, I have a Tali Cates short mystery coming out called "Museums are Murder" and features Tali and Aiden(That hunky vampire you see to the left there on the Bloody Murder cover. NO, silly. Not the mummy, the good looking guy to the left of the mummy.


Event planner Tali Cates's psychic gifts have brought her more than enough trouble in the past. She wants those irksome gifts to leave her in peace so she can support her family and lead a normal life in the small town of Love, Texas.

But when not one, but two beauty contestants in the pageant she's running turn up dead, Tali is again drawn into murder and mayhem. Toss in some witchcraft and kidnapping, and she has no choice but to protect her kids by hunting down the killer. Life gets even more complicated when her son accuses her new boyfriend of being a vampire, which is just plain ridiculous.

Or is it?
Excerpt

Now, Tali Cates and her best friend, Cherilyn have gone to the old Rayburn house and been driven inside because of storm. The storm isn’t the only scary thing in the old house.

Excerpt 3 Bloody Murder Book 2 in the Tali Cates mystery series.
“Shit, shit, shit. We’re going to have a tornado, and it’s not much after noon. They’re not supposed to hit until afternoon or evening.”
“Tell that to those clouds overhead.”
I scanned the kitchen and saw a door on the opposite side from the one outside. “Quick, in here.”
“If it’s a cellar, I’m not going to be trapped inside a death trap.”
“Oh, don’t be a baby. It’s just a pantry but it should protect us.”
She pulled back. “But it’s dark and old and there’s no telling how many critters are in there. Besides, how do you know it’s a pantry?”
I shrugged and pulled open the door, then looked around for light. In the middle of the pentagram on the floor stood a large candle. Plucking that from its resting place might not be good but it was better than being in the dark. I grabbed it, attempting to ignore the energy washing through me.
We barreled through the pantry door and closed it. Now we were in the pitch dark with an unlit candle.
“It’s noon in October, not late afternoon in May,” I shouted. “We shouldn’t be having this strong a thunderstorm.”
“Did you tell that to the weather gods? I don’t think they’re playing by the rules,” Cherilyn yelled back. “How about some light?”
“Do you have a lighter or something?” An abrupt flare of light blinded me as the wick of the candle I held burst into flame. I barely managed to hold onto the wax when I jumped. Thank God I’d dropped the sack of grass at the last thunderclap or I’d have a bag of flame.
“Okay. That was just plain weird. I know you have some gifts, but lighting things with your mind?”
“It wasn’t me. Not on purpose.”
Shelves held the usual things for an abandoned house—dust, cobwebs, more dust, spiders, a discarded, dented can of corn. The hail, wind, and rain had stopped, or else we simply couldn’t hear them, which made no sense. Was this the eye of the storm? I didn’t remember that tornados had an eye; they came and went so fast.
The pantry was enormous, as were Cherilyn’s eyes. She wasn’t looking at me, but above my head somewhere.
“What? What’s wrong?”
She pointed to the wall behind me. “Look.”
I turned. Symbols covered the wall. Most pantries had shelves on at least three walls but this one was as large as a living room, and one wall was covered with hundreds of drawings crammed together, one on top of each other. They glowed with a light of their own—or took the light from the candle. I moved closer to try to identify the drawings but an immediate chill shot through me.
My hands shook, my entire body trembled, sending the candle flame jumping like a demented firefly, throwing shadows in odd shapes all over the wall. I swore the shadows moved on their own. More than anything in the world, I didn’t want to see the things that made those shadows. Fear also moved on its own, pushed into me, froze my blood, stopping all movement, including my heart. Unreasonable fear that made me want to claw my way out of the room took over.