A Will to Love, by Kim Smith 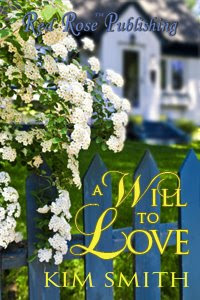 A Will to Love is here!


With the advent of summer upon us, I am proud to announce the release of my second published long fiction, A Will to Love. This is a story about love lost, love found, and love remains forever bound. It is available today at :
My BUY LINK at RRP

Benton Jessup wants his bed and breakfast to be successful. He will go to no lengths to insure that it does.

But when Kitty Beebe, a famous romance author, arrives at The Inn, his desire for success becomes a struggle of wills with love.

If the Beebe woman liked it, her expression of approval might bring more business to The Inn, and cement his chance at having a four star rating. He scowled. Keeping her off his mind was becoming nearly impossible.

Something about her mysterious air, the creative side of her jangled a similar place in him. She'd said she'd lost her land and been reduced to writing, and she'd been damned good at it. Loss had given them the same choices to make. Their goals were the same. Pick up the pieces and succeed at something else.

At the moment, his goal was to make Kitty Beebe tell all her New York friends that The Inn was the best bed and breakfast in South.

But could he get his guest to succumb to his charm, his talent. . .his obsession?

Change. That was what he needed. Change to his approach, his execution. He would make the Beebe woman fall in love with this place, with his very country until she didn't want to return to Ireland.

If he were to succeed at that, it meant giving up his resolve to stay out of a woman's way. It meant putting himself directly in her path and he knew what direction her path would be.

It was written on every page of her damn book.

Angry, he walked to the doorway of the shop and peered out. The rain hadn't let up since daybreak. The early spring green of the grasses was just appearing and he watched as birds fluttered in the ground beneath one of the oaks, playing. They were probably mating.

He turned away, unsettled. It had to do with Kitty. The first attractive woman who had not been a newlywed seeking an overnight stay on the way to a bigger, more fun honeymoon and he was in a dilemma.

Maybe Nikki was right. Maybe his interest had nothing to do with the fact she was a guest at The Inn.

And her book hadn't helped anything.

He'd read some of it while trying to go to sleep. The reminder of the Ireland he'd experienced with Carla was uncanny, and uncomfortable. Since then, he'd only wanted more. He fought the urge to pick it up every time he had spare time. What kind of woman could create such beauty and desire within a man just with simple words?

The reminder of that exact woman who rested in the house across the lawn made him collect the woodwork and walk out into the pelting rain.

Kim is best known for her contributions to the writing world as the hostess for Introducing WRITERS! radio show, a place created to help other writers find a place to nestle in and promote their work.
Kim is a member of EPIC and the Mississippi Writers Guild.

You can find out more information about her and her work at the following places:

Intruiging excerpt, Kim. I wonder what Kitty says about Ireland that haunts him so. I'd like to know if you have run a B&B to base the story on or have you similar 'hospitality' experience?

I have not had similar but I figure being a mother and having to pretty much be a short order cook for so many years couldn't HURT any :)!!! Good to see ya Anita!

I love the excerpt. It sounds like an exciting book. Thanks Ginger and Kim for posting this!

Thanks Katie, good to see you here!