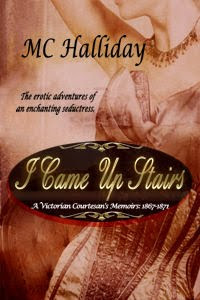 Absurd, you say? In truth, yes but I was born in the UK and lived with Victorian grandparents in a Victorian row house midst Victorian furniture. The differences I experienced in that world are absolutely unlike most modern life in North America.

Heating was solely from coal burning fireplaces. And each room with a door had a fireplace, so if the fire was not lit in the winter (in my bedroom, say), frost was patterned on the inside of the windows and steam expelled with each exhale. The blackened coalman would arrive weekly to top up the shed, the coal dusted chimney sweeps would make regular stops: My world smelled of coal dust and soot.

There were no gaslights by the time I lived in the row house but the ‘electrics’ were precious. Money had to be collected in coin to feed the meter box for heating the water immersion tank and keeping the lamps on. We were very aware of each tick on the meter and maintained a strict Victorian roster of allowed days for bathing and clothes washing. Laundry was done in the kitchen by hand, using harsh soap flakes and then hanged there on clothes lines that were taken down when the linens were dry. I won’t mention the bathing routine, as you’ll all be aghast. My grandparents used chamber pots all their lives, and lived in that Victorian row house in the historic market town of Petersfield from the first day of their marriage until they passed in their late nineties.

Rugs and area carpets were beaten of dust in the tiny back area between the coal shed and the kitchen door. Outside the same door, tea residue and food remains were dropped into an open drain. The walls indoors were covered in floral paper, in each and every room, including the hall and stairwell. There was no telephone, no paper delivery. The postman came twice a day and the milkman stopped by early every morning.

Through my fraternal grandparents, I learned a great deal about Victorians. Queen Victoria reigned until my grandparents were into their late teens and during the latter years of the 19th century, she was very popular with the middle class and her morals were emulated. Protocol was as important as the social grace of not blowing tobacco smoke into the eye of your opponent whilst playing cards.

My grandfather revealed his secrets and history on many occasions when we alone together. I have used some of his insights in my writing, and from his intimate revelations of family and war, I became a huge history buff. It bears worth mentioning that I learned a great deal about class structure in Victorian England from my maternal grandmother, as she was in service for most of her life. From a very young age, she was sent off to work in order to provide for the family at home. Eventually, she had the privilege of a grounds cottage as manor house matron and my grandfather was the lowland gamekeeper.

From all this, conjuring the Victorian era came quite easily in writing, ‘I Came Up Stairs: A Victorian Courtesan’s Memoirs 1867~1871’. The variations from my own experiences were known to me by the chats with my elders and so I heavily researched every detail to get the book absolutely right. All the while, I could envision the cobbled streets I knew and see the Whitechapel district, of which I briefly write: Small dark streets that in the past contained the greatest misery, filth and peril imaginable.

But this tale moves quickly from that horror to a new life for heroine, known as Mae to her friends. Alas, her past never quite leaves her…if I may say, I took this aspect of her life from my own experience, for I must work and work at the challenges presented and seldom learn until up against a wall and forced to make a change. Without further ado:

Led from filth and poverty by a gentleman in the hopes of gaining coin for his purse, Mae is shaped into a lady and tutored in the arts of pleasure. With raw sensuality, she creates a seductive dance that entices the peerage in puritanical England, and she quickly becomes favored courtesan to Prince of Wales. Her renown and riches ever rising, she continues to romp with gamely men and women of both the nobility and the lower classes. Eventually, Mae’s bohemian ways cause suffering for those she loves and her own heartbreak. Must she conform to Victorian mores, or can she remain true to her sensual desires?

These intimate memoirs reveal a young woman’s journey from the slums of Whitechapel to celebrated dancer of the Victorian music hall, and courtesan to the highest peers of the British realm. From the years 1867 to 1871, Mae recounts her varied lovers and false loves, and her heartbreaking losses in a quest for happiness.

You can find me and links to my website at:

Wonderful post, MC! How lucky you are to have had such amazing grandparents. What a great tribute to them to weave their storytelling into stories that will carry over to new generations. Best of luck to you!

Really enjoyed the post, MC! Congratulations on the release of your book today. It sounds like a wonderful read. I know you'll have plenty of sales!!!!

Thank you Cate and Maggie! It was very kind of you both to stop by and leave such gorgeous comments.

And my thanks to Ginger Simpson for allowing me a guest blog on the day of my book release!

Wow, MC! That's an amazing story. I am really looking forward to reading your book. It is on the top of my TBR pile (which as of March 7 has grown by exponential bounds :-) )

Thanks for sharing your experiences!

Intriguing story, MC. You have quite a way with words.

Congrats on your release today. I'm sure your book will be on many people's keeper shelf for years to come.

Mary, I really appreciate the lovely praise...heavenly for an author to be told they have a way with words! As you would know, so thank you very much!!

How enriching to the life of a young girl to hear these wonderful stories.
And I admire all the research you have done for your novel.
Well done, MC.
Congrats and I'm sure sales will be high. Count me in.
Catch you tonight on chat.
Lorrie

Thank you so much, Lorrie! But full truth, not all of what I was told was wonderful: my grandfather was the victim of mustard gas while hunkered in a WWI front line trench in France. He had saved a tin of baked beans for days, until he was starving for it (as there were few rations in the front lines) and he ate it just before he was doused in the mustard gas. He immediately regurgitated the beans and although his eyes and nose and ears were melted shut, he could still breath through his mouthbecause he had vomited the gas out. He always said, A tin of beans saved my life."

See you tonight on the live chat!

Wow! What can one say? Just such a way with words and great story telling, Bravo.

Many thanks for saying so, Chris! I really appreciate your comment!!

Fascinating account, MC. Your novel sounds intriguing and now I know why.

Gianna, you are very kind to say this wee tale of my past is fascinating. And you're perfectly correct; it did create an intimate knowledge of Victorian life...how Victorians spoke (no contractions), the separate WC's and bathing rooms, the careful habits and strict manners of the time, to name a few.
Thank you!

Wow, MC, you were very fortunate to have had your grandparents relay to you what it was like to live during Victoria times. Your story sounds wonderful and I wish you much success with it.

Latesha, I was one of those inquisitive types, always asking questions. But my family were very good about telling me whatever I asked about...I was extremely fortunate as 'one did not talk' in those days.
Thank you so very much for your good wishes!

Hi MC,
Terrific post. Being an historical author myself I love history, and to have had grandparents who were so forthcoming with their lives, no wonder you soaked up the information like a sponge and it shows. As I write WW1 romances myself, I was particularly interested in what you wrote about your g/father and the mustard gas. He was certainly extremely lucky to survive.
Regards

Excellent excerpt, MC!! I love your work and this new book sounds like a true winner. Congratulations on another release. May there be many, many more.

Margaret, you're right, my grandfather was very lucky to survive mustard gas by eating the tin of beans at just the right time! I always thought I might use that, and his resulting hospital stay in one of my books.
I appreciate your kind comments and I'll have to have a gander for your WW1 books!

Sloane, thank you!!
I appreciate your lovely comment and there will be more, once you and I arrange our daily goals. I am feeling better, so soon...I hope!

MC,
Reading your post on your blog made me remember my Grandmother, she was from England as well, and my childhood even tho growing up in Canada we had a sawdust stove in our house, that provided heat and later a steam heater that really didnt heat up the living room much that I recall.
When we moved to Pender Island, we had no power or running water. We used a chamber pot or the outhouse, the woodstove set the roof of the cabin on fire when my sister and I were tired of being cold and wanted some heat, this let my parents know it was time to do something, so we gave up our kerosene lamps and got electricity. Still the steam heater tho. Cause it was electric.

They tried to dig a well to get some running water, but not enough was there to produce anything but a trickle and a very fast shower in the summer from the sun. We bathed at friends houses while they were away. With permission I thought. lol. Other than that I didnt smell very nice for the 2 and a half years we lived there till we moved to the city of Edmonton. I was 12 to 14 years what away to grow up. LOL
Julie B

Julie B, sometimes we think our past is secular and often find otherwise. Your tale is a great example of the trials of living 50 odd years ago, in any country.

Thank you so much for your remembrances!!! It was difficult to survive with ease 'way back when'...I appreciate you sharing!!!