The Wonders of Make A Wish

I've finally found a real "flesh and blood friend."  For the past few weeks, Debbie, who lives in my same condo village, has been coming over on Monday, Wednesdays and Fridays to exercise with me on my Wii board.  She makes life fun even when we're huffing and puffing and sweating like pigs.  She shared a story with me the other day that pulled at my heartstrings and made me admire her even more than I already do. 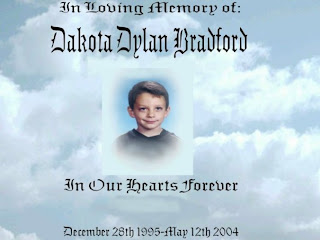 Meet Debbie's beloved grandson, Dakota.  He was only eight years old when he passed away from cancer, but his memory is still fresh in his Maw Maw's mind.  I found myself swallowing a lump in my throat as I listened to Dakota's story, not just because an innocent child became a victim of such a cruel disease, but because my grandson just turned eight and I can't fathom my world without him in it.  I've bemoaned the fact that he's autistic, but at least I can rest easy that no matter how hard life may be for him at times, it won't kill him.

Because of the Make a Wish Foundation, Dakota got to go to Disneyworld before he passed.  His family could never have afforded the expense, and Make a Wish gave a little boy some happy moments before he, in his own words, went to be with Jesus.
Debbie shared that while Dakota's time waned, he saw her unhappiness.  "I'm going to die," he said.  "But don't worry Maw Maw, I'll just sit and play games with Jesus in heaven until you get there."
The Bradford's loss that day was heaven's gain.  Debbie also shared that Dakota has a cousin he adored, and all Dakota wanted was to be thirteen like his idol.  On what would have been Dakota's thirteenth birthday, the family gathered and celebrated in his honor.   I only pray that if God grants us one miracle, it will be to find a cure for Cancer.  It steals too many people from those who love them, and often way beyond their time.
I'm going to donate my next quarter royalties to The Make A Wish Foundation.  I invite you to join me by giving whatever you can afford.  My donation might not be enough to grant a child's dying wish...heck not even enough to take the family to McDonalds for dinner, but together we can make a difference.  Click here to visit The Make a Wish website and give someone what they wish for...someone like Dakota.
Posted by Unknown at 7:41 AM

Email ThisBlogThis!Share to TwitterShare to FacebookShare to Pinterest
Labels: Cure for Cancer, Donate to the cause, Ginger Simpson's Blog, Make A Wish Foundation

That is so cool, Ginger. Good for you. There is a big Make A Wish Fundraiser here in a couple of weeks and I plan to support it big time. Well, as big as I can afford. LOL

my heart goes out to anyone who loses a child.