Meet Dr. Joe Sivak - Stopping by on his Blog Tour 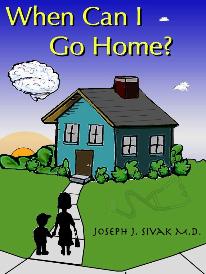 The book candidly traces with graphic detailed description and dialogue the course of the fatal illness. The emotional issues of such pivotal events as the loss of autonomy of driving a car and entry into a nursing home are experienced through the eyes of a young son. From a concurrent viewpoint Alzheimer's is explained with the wisdom of a 21st century physician who has personally experienced the emotional anguish, and thus the fact-based journey is a truly unique dual-perspective Alzheimer's memoir. The story juxtaposes the active uphill battle to become a doctor set against the backdrop of the passive helpless struggle of losing a parent to the disease.

The narrative provides explicit commentary on the modern plight of the physician and the global connection family members of an Alzheimer's victim painstakingly share. The unusual, seldom before elicited insights of the dual-perspective vigorously address universal issues such as coping, hope, futility, humiliation and societal bias toward the disease throughout the text.

Joseph J. Sivak MD is a board certified adult psychiatrist with twenty years of experience in direct patient care. He has taught and lectured in the United States and internationally in the areas of Post Traumatic Stress Disorder, Mood disorders, and chronic suicidal ideation.

He completed medical school at Hahnemann University School of Medicine in Philadelphia, and Residency Training at the University of Rochester. Dr. Sivak has served on the Board of Directors of the Minnesota Alzheimer's Association and the Northland Chapter of the American Red Cross and hosted a weekly mental health Radio Program for eight years on KUWS- Wisconsin Public Radio. Currently Dr. Sivak serves on the legislative committee of the Minnesota Medical Association, is a assistant professor at the University of Minnesota-Duluth College of Pharmacy and is in full time private psychiatric in Duluth.

I first started writing When Can I Go Home? back in 1989 when I was in my last year of medical school. That was about a year after my mother died from Alzheimer's disease.
The book is a memoir about my mother's futile struggle with the disease. After she passed away I had a tremendous need and sometimes furious drive to record the journey in a timeless and permanent way. As a teenager, I had been my mother's primary caregiver for a few years, as the disease progressively robbed her of her cognitive abilities, personality and her very essence. At the time writing about it was very cathartic.
The disease process is profoundly isolating for families and I wanted to scream out and tell the world. That element is there in so many Alzheimer's memoirs.  Unfortunately the issue of isolation has not improved in our society and much as we like to pretend it has in the last thirty years since my mother was diagnosed. At that time most people had not heard of Alzheimer's disease and of course now it is a household term, but as a society we are still ignorant and terrified about it till it affects our own family. The isolation is still there.
The book is a bit unusual or even paradoxical from an Alzheimer's memoir point of view in that  It presents a dual perspective. First is a family caregiver specifically a teenager son, which is a bit unusual and at times even bizarre, since that is not the prototypical demographic of a caregiver. The other perspective is a clinical one from a physician. I have treated thousands of patients and their families affected by many psychiatric and neurological problems including many Alzheimer's victims. The clinical information is broken down and translated for the reader.
So you essentially have these two very different points of view sort of flip-flopping but sort of coming into what I hope is a harmonious symmetry. The third aspect of the book is an underlying and ongoing commentary on all the relevant sociological and psychological issues this book interfaces with. Such issues as the state of health care delivery, being a doctor, and the aging population are addressed and sometimes not in a very convenient way for those that need to hold onto pretense and prejudice for security.   For example as a society we really don't treat the aging population with the honor and dignity they deserve. We are pretty much obsessed with youth and appearance. We also have a lot of bias toward the medical profession if not at times completely vilifying the field. So in that sense speaking candidly about things albeit my opinion yet based on experience may open the readers eyes, on some issue conversely it may propel some to try to look the other way even more. It's not always politically correct, but it is a memoir and it is honest. It is sort of visceral, some people will cry some will laugh some will get more angry, it makes you feel first, then think.
The manuscript was hard to finish, it lay dormant for some fifteen years, I never had an ending. Even after the death of an Alzheimer's victim, there is never an ending for the five million families affected by the disease.  something hit me, after all these years. We are all universally humanly connected by this disease process, and I had the clarity to finish this book.
I love writing, but most of my energy and creativity is spent in my day job. I am currently working on a novel about psychiatric residency. Fiction is obviously a much different prospect than a memoir but it taps a different part of your brain and soul to create something like this compared to a memoir.
Joseph J. Sivak MD
www.niagarapress.net
http://alzheimmers.blogspot.com
http://www.facebook.com/pages/When-Can-I-Go-Home/357170603956
twitter @whencanigohome

You can also learn more about Dr. Sivak on his website
Posted by Unknown at 4:00 AM

I can really understand. My mother had it and I think it is the worst of diseases. After she died, it took me a long time to remember my mother for the person that she was and not the person she became. Thank you for the post. Excellent.