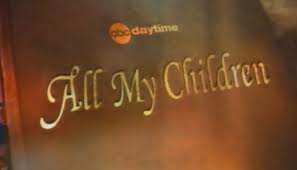 I confess, I watch soap operas. I got hooked on All My Children when it first began, and I watch it every day. Actually, I record it and watch it when I take a break from the computer. Until they develop a twelve-step program for withdrawal, I'll watch it until Erika has slept with every man possible or they've run out of storylines.  I'm amazed how someone can die one season and come back the next without a scar.  *lol*

Readers live vicariously through the books we read, but there’s something blocking my ability to do that while watching characters play out their roles on TV. Take today for example. While being consoled by his girlfriend's mother...after finding his gal locking lips and sucking tongue with another guy, Damon suddenly, overcome by his young hormones, kissed Liza. Of course, one kiss and they immediately start ripping off one another's clothes. That's where reality ended with me. If I had a body and all those beautiful red hair extensions like Liza, I could have considered being a Cougar, but the thought of exposing my old, wrinkled birthday suit to a young man left me cold.

Being an author, I find myself exasperated. Even watching serials has been affected by my editorial experiences. I find myself talking to the TV…things like “Yeah, I believe that,” and “oh, how predictable.”  Why don't script writers have to follow our guidelines?  I know I've already mentioned how a character couple rolls over in bed, awake from a night's sleep and nose-to-nose, engage in kissing. Of course, their makeup is never even smudged, but who wants to swap spit when I'm pretty sure morning breath should be an issue.  If I go to sleep with makeup on I wake-up looking like a racoon.  C'mon, producers and directors...show real live people...people we can identify with.  Put a little weight on those stick women, and keep Erika out of the plastic surgeon's office.  Amazing...the lower my boobs get, the higher hers climb, and if I'm not mistaken, they've gotten a tad larger.

"They" say (WHO are they?) TV puts ten pounds on you.  I think Erika, Kendall and Liza must weigh 98 pounds then.  I have noticed one thing though.  No matter how much surgery you have on your face and body, the crepy neck always gives away a woman's age.  Erika doesn't have a crease in face, and I think she had a little lip surgery done, but her neck looks horrible.  I'm guessing that's why she had a boob job...to draw people's eyes away from what looks like an exposed esophogas.  When she's performing, I can't draw my eyes away from her throat area.  I'd really like to see her in person, although I'm sure that would be even more depressing if I discovered she really doesn't have thinning skin, and age spots.  And then there's her "daughter" Kendall.  The woman has had heart transplant surgery, suffered while her husband and best friend were stranded together in an abandoned mine, and recently lost the love of her life in a plane crash.  I'm waiting to see where her dearly departed Zach crops up.


Eika and I pretty close in age, and while she's still putting notches on her bedpost, my interest in sex has waned...much to my husband's chagrin.  I mentioned it to the doctor during my last visit and he offered testerone shots.  I paused for a moment and raised a brow. This is how the conversation went:

"Aren't those MALE hormones," I asked.

"Well aren't they're side affects?"

Okay, I'm getting the feeling he's avoiding the facts here.  I can only ask the burning question in my mind.

"What would I probably experience if I took the shots besides an increased libido?"

"Oh, probably deepening  of your voice and some abnormal hair growth,."

I'm already plucking chin hairs, so I'm really not eager to make it a fulltime job.

"You mean, I might get a moustache as thick as my husband's?"

I didn't have to think a minute longer.  "No thanks...I'd like people to be able to tell which one of us is the gal."

I love All My Children to but I totally agree. This was to funny.
Debbie

So that's it. For men they have viagra whatever that other pill is called and we get men's hormones in the form of a shot yet. Not to mention facial hair. Like you, I'm tired of plucking the chin hairs. I'll do without the sex, thank you very much.

Once you hit a certain age...most women have more male hormones than their men. Unless you are a soap star or can afford a pool boy. I agree with Ginger...NO MALE HORMONES! Ginger I love the things you make me think about. Keep up the good work.

Ro...I finally figured out where those chin hairs come from. If you look closer as everything shifts downward, you'll see that you're missing some eyelashes. *lol*

Thanks for a wonderfully witty and fun blog, Ginger! I'm addicted to Erica's shenanigans, myself, and try to watch the show whenever I can. I actually had the good fortune to work backstage ocassionally on All My Chiluns, back in my NYC Wardrobe Union days. I have to say that she was a complete doll, sweet, unassuming, and quite beautiful in person. Although, small as a gerkin. I always thought it was a hoot they passed her off as a model when she is maybe 5'1". Anyway, I grew up with Erica Kane and often wonder if she, like Dorian Gray, has a portrait in the attic.