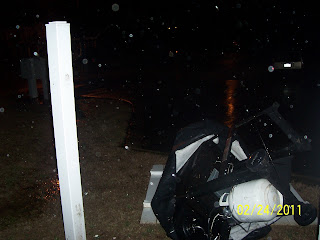 Last night we had severe straight line winds that blew through in about five minutes, leaving trees and power poles down and wreaking havoc. We heard a large crash outside the back door of our condo, and hubby said, "I don't think we have a fence anymore."

Now, I'm from California, and I'm used to the ground shaking once in a while, but I never expected the wind to pick up our BBQ and throw it through the privacy fence, but it did.

This is tornado season in Tennessee, and we were under a warning until around midnight. That means that weather preempts all my favorite shows.  They don't mess around here when it comes to storms.

I've already witnessed the aftermath of two of them here in Tennessee, and I don't want to come any closer than I did with the last.  We were still living with my son and his wife, and the five of us huddled in their basement closet while the wind sucked the air from our lungs and sounded like a freight train passing by.

The swirling dervish missed my son's house by very little, and walking to the end of the street and viewing the swath of destruction was horrible.  That twister killed seven people here in Gallatin.  Now I'm asking myself if there really is a safe place to live right now.  Seems Mother Nature is pissed at all of us.
Posted by Unknown at 8:30 AM

Wow, storms are scary. I guess I'll take the snow. Problem is in May and June we're in tornado season too. Guess we get double whammy. And after all the snow, we're prone to floods. Guess you just can't win. I think someone is definitely pissed at us. Not sure if it's Mother Nature, but the whole world seems to be devastated by some kind of storm or other.

Glad you're okay, Ginger. Yes, the weather in our area gets rather violent, and storms do preempt anything on TV until they've passed. But, I do so love the south and would rather face tornadoes than earthquakes. lol. Not great options to choose from are they?

I've heard it said that Mother Nature is in menopause....