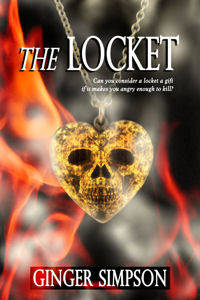 Today, I'm pleased to share six sentences from my upcoming release from Eternal Press.  The Locket is the first and only book I've ever written that has an object as the main focus.  Here's my six sentences on this dreary Sunday in Tennessee (okay I cheated and put in the last sentence in the paragraph.)
O'Day closed his notebook, stuffed it in his breast pocket, and with a cigarette and lighter already in hand, headed for the door. His report was conclusive.  Sally Curshaw killed herself for reasons unknown. It happened sometimes, and evidence from her autopsy proved the gunshot had been self-inflicted. One more case closed. He stepped outside and lit a cigarette, inhaling deeply to satisfy his craving. The cloud of smoke he exhaled brought with it a cough that grew deeper with each passing day.

You'll excuse me if I do a happy dance, since the video for this book won third place in the You Gotta Read February video contest.  Thanks to everyone who cast a vote for me.  I was honored to be in the company of great creative minds.
Posted by Unknown at 9:08 AM

Love those six sentences. Ginger and congrats on third place.

I love that creepy looking locket. Where can I find one? LOL I would totally wear that.

The video did what it's supposed to--made me want to read the book!