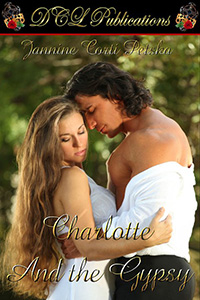 My latest book, CHARLOTTE AND THE GYPSY, available from www.thedarkcastlelords.com, taught me a lot about Gypsy life. They were a practical people, close-knit, protective of their own. The rigors of the Gypsies' nomadic existence brought about little discipline in the Gypsy child and teen. Growing up, they learned by example. Their parents were responsible for their manners and attitudes as well as their contribution to the camp and their eventual marriage. One thing was for certain: Bachelorhood was frowned upon. Weddings were a time of celebration that often lasted for days. Most Gypsies married in their teens. In Rom society, a male Gypsy couldn't be called a Rom until he was married. So you can see the importance of matrimony in their culture.

Marriages were arranged by the parents. The prospective couple might be consulted, but their opinions didn't count. Usually, the parents of the groom selected his bride-to-be. They measured the girl's worth by her disposition, health, and her family's prestige in their community. She must be strong, enduring, and open to having many children. Then the father of the groom met with the father of the bride to discuss the bride price, which compensated the father losing his daughter. It was a price that covered the cost of raising his daughter from birth. With an arranged marriage, the couple didn't have a formal courtship. Was love ever involved? Rarely...although there was always hope that eventual feelings of love would bring the couple closer.

Gypsies were not allowed to marry a non-Gypsy, although an occasional gaje (non-Gypsy) slipped through the cracks. That couple would be kicked out of their clan. To the Gypsies, outsiders were unclean and couldn't be trusted. These facts made writing this book a bit tricky. I had to balance fact with fiction and come up with a damn good reason a blonde-haired, blue-eyed female lived among the Gypsies.

For Rafael and Char's wedding, I used many different Gypsy customs, which differed from clan to clan. (You'll have to read the book to learn about these customs. ) Marriage by abduction was a possibility, but as you will read in the short excerpt below, Char did not approve of this method. (Of course, she's quite opinionated.)

The Medieval period being a man's society, once the couple wed, the bride belonged to the groom and lived among his family. She basically had no say. Instead, she cooked, washed clothing, took care of the children, and appeased her man's lusty appetite. Poor Rafael. He was born with a large dose of lust. What would a Gypsy hero be if he wasn't hot-blooded? You'll feel a bit sorry for Rafael. Women fall at his feet. Through no fault of his own, he gets into situations that stretches Char's trust and emotions. But in the end, love conquers all. It doesn't hurt that Rafael is gorgeous and a bloody good romp in bed. ;-)

Thank you Ginger for hosting me today. And to all latcho drom (Romany farewell).
Blurb:
Charlotte Nikolos was raised in a Gypsy camp, her pale hair and light skin in stark contrast from the darkness of her family. After she learns she has two sisters somewhere who share her looks and psychic powers, she's determined to search for them and learn why her birth mother sent her away. But where does she begin?
After three years of roaming, Rafael Cazares returns to his Andalusian Gypsy camp to persue the woman he left behind in disgrace. He must win back Char's trust and recapture her heart. He insists on helping her find her true family but soon realizes someone is determined to keep them apart.  When Rafael's deep, dark secret is revealed, he will do everything in his power to protect the only woman he has ever loved. Even if it costs him his life.
Excerpt:
“Unless you have an apology, I’ve naught to say to you,” she said.
Her stiff posture and taut features made clear her lingering unhappiness over his impulsive kiss. “I’ll not apologize for our mutual transgression.”
“Mutual? I think not.” Venom coated her tongue.
“Why did you run off?”
“Because you—” she broke off and retuned her gaze to the deserted road ahead.
“Could it be that you feared your desire for me?”
She glared at him. “I desired not the kiss but to be left alone to finish my bath.”
He longed to kiss away that temperamental pucker on her lips.
“And do not speak of your rights,” she added scathingly. “My lips belong to me, and I’ll share them with the man I truly desire.”
“Then I shall make you desire me once we are wed.”
“How dare you continue to taunt me with a wedding I refuse? You would deal better with a woman who will shower her affection upon you.”
Rafael smiled slyly. What she had conveyed in that exquisite kiss was a desire most women wouldn’t deny.
Find out more about Jannine on her website.
Posted by Unknown at 4:00 AM

Hi Ginger Simpson - we don't know each other, but I know Jannine Corti Petska and admire her writing.
Congratulations on your new novel, the second in your sisters of Destiny series.
I wish you many salesm cara,

Great book, Jannine, and best of luck with it! Your readers will enjoy this one.

Thank you, Kate. That means a lot to me.

You're a great editor, Miriam!

Great blog Jannine!!! Sounds like you did a great job twisting history with fiction... :)

Good luck with the release!

Ginger, thank you for hosting me today. I always love coming to your blog.

Thanks for sharing your knowledge. I think gypsies would be an area I'd stay away from....like the mafia. I don't know anything about them and would really mess up the book.

LOL, Melinda. I didn't know a lot about Gypsies until I researched the book. Now the mafia is a different matter.

Thanks for stopping by.