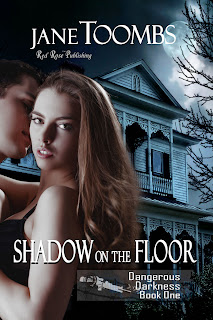 What did I know about Special Op Agents, Central American jungles or AK47s?  Nothing--that is until I did research.  Have I ever seen or felt a ghost? No. But others have and some have written about their experiences, so I can learn about ghosts from research.
As many other authors do, I enjoy research,  It becomes a sort of painless learning because what one is researching is usually an interesting subject  even if it wasn’t needed for a story.  I’ve heard a few authors say they hated to do it, but it is necessary.  Many of us go the other way and have to force ourselves not to do far more than we need for the book.
Another research plus is you have this raft of material you can use for another book--or more--in due time.
Once I had the research done, I only needed to use  dribs and drabs of it for the prologue of Shadow On the Floor, the first book in my DEADLY DARKNESS SERIES.  But those small added details were important. Why?  Because readers start out by believing what happens in a story.  So, if they find no glaring errors, then tend to trust the author has everything right for the rest of the book.
So, obviously, at any story’s beginning, every author must be sure all the details are correct.  In other words, Yes, the USA has had at one time or another, Special Ops Agents, in the jungles of Central America.  Yes, the jungles there look and sound like the story says.  Yes, AK47 fire is deadly and the kill rate is high.
When we get to the ghosts, the going is easier,  There are so many variations of ghost sightings that I was able  to pick and choose the ones that fit best for my story.
As for  the other three books of the series: Watcher  At The Door,  Terror From Before and Stranger On The Shore, the prologues in each are in that same jungle, but differ since they’re told from each one of the hero’s point of view, so the same research could be used.      The paranormal element in each book differs, so some research was necessary there.  But  the first chapter in each book begins with all the heroes no longer in the Agency and back in civilian life, and all of the books are set in Michigan’s Upper Peninsula where I live, I pretty much knew the different areas each wound up in.  Only when I set a story somewhere I’ve never lived or visited do I do intensive research.
As for paranormal, I enjoy reading and writing it, so I do know write a lot of it.  Which means I’ve created my own version. of shapeshifters, witches, and vampires.  Once I pick a version I tend to stick with it--sort of like a brand.
So in the second book, I had to do minimal research, since the paranormal element is a shapeshifter. Third book--death bird.  Never wrote about it, but did the research long ago since I knew I’d need it someday.  Fourth book--nanabots.  Yes, they do exist but researchers are still working on refining.  Well, mine are refined, but even the mad-doctor-type who created the ones I use, has no idea they can replicate themselves as needed. Can’t wait to write this one.
SHADOW ON  THE FLOOR comes out June 2, 2011 from Red Rose Publishing.  My website will have a buy button.
www.JaneToombs.com
Blurb: A former special op agent turned lawyer, Dev's suspicious of Natalie, the young woman his cantankerous old uncle hires to help round the house. For one thing, how does she know how to step around, rather than on, the shadow that's
always stained the den floor?