My name is Lin Holmes and I write as L.J. Holmes. Currently I have twelve contracts with Muse Publishing and hopefully more coming along in the wings.

My first story is SANTA IS A LADY and is Book One of The Christmas Miracles Series. It released on December 1, 2010 and tells the story of Angie, a young woman who nearly died in a car accident and has been battling back ever since. Her friend Beck owns a confectionary store and it is five days before Christmas when she loses her Santa. With no professional Santas unemployed, Beck has to scramble. Her scramble leads her to Angie’s door.
Cameron Drayton wants to show his newly acquired daughter the perfect Christmas. Unfortunately he doesn’t think a female Santa means “perfect.”
This story amazed me. It wrote itself actually, and that must be the right way for me to tackle the creative Nudge side of me. Six weeks after releasing, it won the 5th place in its category for the year long P&E 2010 Readers Poll.
Now I was on a roll, but the question I get asked most frequently is, “How do you come up with your ideas?” So I thought I’d give you a little bit of a demonstration…
This picture drew me to write because it describes me, and writing. In this picture I see the many facets of my mind at various stages of engagement. There are so many levels of fantasy, creativity, and intrigue hidden in this picture I just fell in love with it.

When a storyline comes to me, I am like the sleeper, with my palm turned up and my body stretched out oblivious to what is churning just below the protection of slumbering flesh or out there in my wild imagination. It is Nudge, my inner story weaver, or some call her their Muse, spinning and shuttling here and there yanking on this thread, blending it with that one and eventually creating a tapestry of beginning, middle and end reality.
Using this picture, for instance, let me show you what I mean… 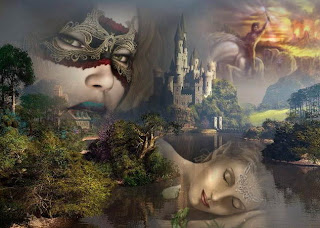 Beneath the burgundy folds of the intricate mask designed with the contours of her own face in mind, her tender nostrils flare. Somewhere within this space he walks. Would she recognize his visage as readily as she now had his scent? What world is he from? Inhaling discreetly, she tried to separate the different tangs. Could he be from the Malfa Four Quadrant? No too much nutmeg to be Malfoinian. Perhaps he’s from the Trelap Concircle? Yes, definitely of Trelapian ancestry, but with just a hint of something else. Pumpkin? Could it be Pumpkin?
How long had it been since a Frantaxian walked amongst them. Correction part Frantaxian. Great Starasia, she’d forgotten how deliciously intoxicating Frantaxians could be to one such as her. Still to breathe in that sweet, overpowering aphrodisiac after all these eons…
And from there the story goes on, and all from looking at a picture. But that’s not the only way my inner Nudge assumes control to weave her wordy magic.
I can be sitting at the Mall, eating my relaxed lunch and see a child with a balloon go from giggling toothily to howling furiously when the string of that balloon slips and drifts rapidly towards the skylight. Who is going to calm that child down and how? Will one of the nearby adults risk life and limb to teeter their way up towards the high ceiling and try snatching that dangling balloon ribbon, or will the man at the helium tank take pity on the upset child and inflate another? Suppose the balloon man inflates another only to have the child scream even louder because this balloon is green not red?
So many variables and each will take the story down an entirely different path.
I knit winter scarves and hats for my family in Montana each year. My sister-in-law is a Minister, so I also knit pounds of scarves and hats to give to the needy out there. Every scarf and hat I knit requires a certain amount of plotting, planning, and following some form of a design, but if I tweak one strand, it changes the finished product enough to resemble an entirely different piece.
For me, Nudge guides the strands, diving in and out and twirling all around, and in the end, well, in the end I have an incredible twelve contracts in just this last year with MY MUSE, Muse Publishing.
I am not a plotter as a writer. Nudge would soon put me straight if I tried to take on such unrealistic airs. I’m a by the seat of my pantser, and to be honest, it awes me when I go back and actually read the stories Nudge has guided me to write. When you are in awe of what comes out of you, there’s nothing better.
I want to thank you for inviting me to visit and letting me share my methods, convoluted though they may be.
I can be followed at my Muse Dedicated Blogs
http://linsownblog.blogspot.com  for the Main Side of Muse’s offerings
http://linsownfirebrand.blogspot.com  for the Hot Side
http://linsownbooklounge.blogspot.com for the Young Side
http://linsownoyster.blogspot.com and for all NON Muse authors.
I also have an author’s page at both Muse It Up and Muse It Hot
www.museituppublishing.com
www.museithotpublishing.com
My e-mail address is :
Spatzdkat1212@yahoo.com
My books for this year are:
My books so far for 2012 are:
Posted by Unknown at 4:00 AM

Email ThisBlogThis!Share to TwitterShare to FacebookShare to Pinterest
Labels: Ginger Simpson's blog., L.J. Holmes, Muse It Up Publishing, Santa is a Lady

Well, I see my 2 favorite ladies are at it again. Both Lin and Ginger are the most amazingly prolific writers i've ever encountered. I've been fortunate to read both writer's work and the quality is right up there with the quantity!

LIn, I am always learning new things about you! With all that you do you knit hats and scarves? I liked the part when you said your Nudge has skeins of story that weave like the yarn for your hats and scarves. Being someone who has knitted I can appreciate that very much.

You are a gifted storyteller and you got me hooked on that strange story you found in the picture. That picture is very inspiring, though. Your mind is something to behold.

Thank you Ginger for giving us another look at Lin our Goddess of Blogging.:)

Lin, you are an amazing woman...you and Nudge, of course. (smile) Excellent post - I absolutely love that picture. It reminds me of a picture I would see on a Dreamworks Taro Card. Those are intricately woven into a story, like your picture.
Ginger, thanks for hosting Lin.
Congratulations on all of your books.

Lin, Frantraxians, nutmeg...Fabulous! You have an amazing mind! Really amazing! Got you, as well as other muse authors, lined up for summer reading! Can't wait!

Interesting.
I enjoy learning about authors I'm not familiar with, so this was a treat. Thank you.

Yep...I'm at home right here with my two favorite friends...Lin, I had no idea of what all goes on in that creative mind of yours and today was equally inspiring. Beautiful insights and beautiful post. I s'pose Ginger brings out the best in all of us...Love you guys, really, really do.

Wow, Lin, that's fantastic. How do you do that? One of the questions I often get asked is where I find my ideas also. I don't have a name for my Muse, but I love when she takes over and the story flows. Not only are you talented, you have quite an imagination. By the way, I love pumpkin, especially the smell of it. LOL Thanks for sharing.

Thank you all for joining me here. You all know I adore Ginger so am always eager to stop by and visit.

Roseanne, I have no idea how I do it. It just comes, and I don't know ahead of time what it going to pour out.

I haven't always been certain my quirky mind was a good thing. Kat was saying just last night she has no idea where my mind comes up with these ideas. However, she did declare that I am definitely weird!

DA Kenter, I'm honored you not only came over to visit, but left a comment too. Thank you.

I love my mom but as you all now realize, she's quite nuts.:-) It's part of the fun.

I'm awed by your amazing demonstration of imagination! Not to mention your productivity. Thanks for sharing your madness (since you insist that there's no method!)