First I want to thank Ginger for hosting me today. It is always fun to visit other blogs and meet new folks, and I always enjoy it here at Dishin' It Out. 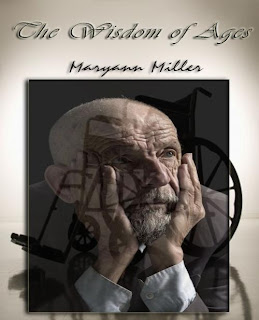 I thought I would share the back-stories and excerpts from my new short story collection, The Wisdom of Ages, that was just released by Books We Love Publishing Partners (http://bwlpp.com/)
The first story in the book, MAYBE SOMEDAY, was inspired when my husband and I were on a road trip, and I saw an old black man sitting under a tree watching the cars go by. The story was one of those rare gifts from my muse, and came to me in one great rush that needed little rewrite or editing. The story placed third in the Page Edward's Short Fiction contest in 2004. Here is an excerpt:
Samson sat in the meager shade of the small Mimosa tree that graced his front yard, watching the traffic on old highway 79.  Granted, there wasn’t much, but every now and then a shiny new car would pass, heading toward the resort Samson knew was somewhere down the road. Or a car full of teenagers would zoom by, the boys laughing and tossing their empties out the window. And as many afternoons as he’d spent out here, it never failed to surprise Samson how much things had changed. On a good day he could count up to a hundred cars going by. Times used to be when one donkey cart coming down the road was cause for celebration.
* * * * *
The second story, THE LAST SUPPER, was also inspired by real people. I don't know what it is about old men and their stories, but this one came to me one day when I was having lunch with my husband at a diner - I simply have to stop meeting these other men when I'm out with my husband. That day at the diner, I saw two older men at a nearby table, and I could tell by the way they interacted that they had a long and close friendship. I got to wondering what that friendship was like, and that wondering took me in an unexpected direction.  Here is an excerpt:
Mel stood in the doorway of the diner and glanced around until he spotted Rube at a table in the corner. Damn long way for an old man to have to walk. But then, maybe Rube had picked it on purpose. They both kept saying how much they needed to get more exercise.
So how’s it hanging?” Mel asked when he’d crossed the room. He folded his walker and leaned it against the end of the table, then eased his stiff body to the seat.
Rube made a so-so gesture, “It’s just a pisser now.”
Mel laughed at his friend’s joke, made more amusing to him by the fact that he didn’t have an enlarged prostate. The only good news he’d gotten this year from Doc Nelson. So if he was to meet the right woman and she was willing, he could possibly even get it up without the aid of a pill. Maybe Sally’d oblige an old man, he thought as she approached the table. God knows they’d joked about it often enough.
* * * * *
The third story, THE ONE O'CLOCK NAP was also inspired by a real person. A friend of mine from church shared his frustrations with getting old and having health issues that limited what he could do. It made him feel helpless and worthless, which is such a common challenge to us all as we age and have limitations. The title came from his comment that he hated his daily One O'clock Nap because that was time lost forever and he didn't have that much time left.  Here is an excerpt from that story:
Tom Franklin opened his eyes and didn’t know where he was. This wasn’t his office, but that was the last place he remembered. He’d just swiveled away from his desk to try a hook shot with a paper-ball and missed. Then he’d reached down and...
Nothing.
He turned and saw the steel rails of a hospital bed. Beyond the rails, he saw his daughter, Bettianne. He wanted to touch the tear trickling down her cheek, but something prevented the movement.
“Oh, Dad,” She squeezed his shoulder. “You scared us.”
What did she mean? His mind screamed for an explanation, but his lips refused to form the question.
* * * * *
I just love it when stories present themselves the way these three did. It doesn't happen all the time, so we sure need to take advantage of when they do. My husband just wishes they wouldn't come in the middle of our dates. LOL
* * * * *
Author Bio:
As a journalist and author, Maryann Miller amassed credits for feature articles and short fiction in numerous national and regional publications.  Play It Again, Sam, a woman's novel and One Small Victory, a suspense novel, are electronic books available on Kindle, Nook, and other e-book reading devices. One Small Victory is also available in trade paperback. A mystery, Open Season, is a new release in hardback from Five Star Cengage Gale. A novel for young teens, Friends Forever, is available as an e-book and in trade paperback. She has also written several screenplays and stage plays and lives on some acreage in the Piney Woods of East Texas with her husband, one horse, two goats, two dogs, four cats and whatever wild creature wanders through the property.
Website: http://www.maryannwrites.com
Blog : http://its-not-all-gravy.blogspot.com/
Twitter:  http://twitter.com/#!/maryannwrites
Facebook : http://www.facebook.com/home.php#!/Maryannwrites
Goodreads: http://www.goodreads.com/author/show/551516.Maryann_Miller
Posted by Unknown at 4:00 AM

Wonderful stories. I wanted to keep reading everyone of them. Guess I'm adding another to my To Buy list - I really do need to win the lottery, I'll never be able to afford all these books.
You're a talented writer, Maryann. Thanks for sharing with us.

Interesting excerpts. I love learning how authors get their inspiration! Thanks for sharing.

Congrats, Maryann, on your new release! I enjoy both reading and writing short stories myself.

Thanks Jacqueline. I'm really excited about this collection. I write short stories sporadically, but do enjoy reading them. I remember when there were a lot more general magazines that would include a story or two in each issue.