26. Google is actually the common name for a number with a million zeros.

27. Switching letters is called spoonerism. For example, saying jag of Flapan, instead of flag of Japan.
28. It cost 7 million dollars to build the Titanic and 200 million to make a film about it.
29. The attachment of the human skin to muscles is what causes dimples.
30. There are 1,792 steps to the top of the Eiffel Tower.

31. The sound you hear when you crack your knuckles is actually the sound of nitrogen gas bubbles bursting.
32. Human hair and fingernails continue to grow after death.
33. It takes about 20 seconds for a red blood cell to circle the whole body.
34. The plastic things on the end of shoelaces are called aglets.
35. Most soccer players run 7 miles in a game.
36. The only part of the body that has no blood supply is the cornea in the eye. It takes in oxygen directly from the air.
37. Every day 200 million couples make love, 400,000 babies are born, and 140,000 people die.
38. In most watch advertisements the time displayed on the watch is 10:10 because then the arms frame the brand of the watch (and make it look like it is smiling).
39. Colgate faced big obstacle marketing toothpaste in Spanish speaking countries. Colgate translates into the command “go hang yourself.”
40. The only 2 animals that can see behind itself without turning its head are the rabbit and the parrot.
41. Intelligent people have more zinc and copper in their hair.
42. The average person laughs 13 times a day.
43. Do you know the names of the three wise monkeys? They are:Mizaru(See no evil), Mikazaru(Hear no evil), and Mazaru(Speak no evil)
44. Women blink nearly twice as much as men.
45. German Shepherds bite humans more than any other breed of dog.
46. Large kangaroos cover more than 30 feet with each jump.
47. Whip makes a cracking sound because its tip moves faster than the speed of sound.
48. Two animal rights protesters were protesting at the cruelty of sending pigs to a slaughterhouse in Bonn. Suddenly the pigs, all two thousand of them, escaped through a broken fence and stampeded, trampling the two hapless protesters to death.
49. If a statue in the park of a person on a horse has both front legs in the air, the person died in battle; if the horse has one front leg in the air, the person died as a result of wounds received in battle; if the horse has all four legs on the ground, the person died of natural cause.
50. The human heart creates enough pressure while pumping to squirt blood 30 feet!! 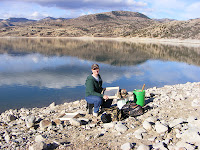 Ruby Reservoir ~ Calcite, opalite, and garnets are found south of Alder, Montana. Some people find gem quality almandine garnets by screening the gravel along the shores of the reservoir.
Posted by Rita Karnopp at 2:00 AM

Very interesting and entertaining. I enjoyed the read despite all the blinking and laughing I do, and now I have to go wash my hair. All this cooper and zinc just keeps building up. *lol* OH, and I loved discovering that the skin on my thighs are attached really, really well to the muscles. :)