New Territory of Montana 1863. Sarah Bryson’s silent world is destroyed when her so-called fiancé has her kidnapped to prevent his discovery as a gun-runner. After surviving a massacre, she is rescued by Blackfeet warrior, Two Shadows. But in order to reach the safety of his village, they must confront wild animals, ruthless mountain men, treacherous mountain storms, and Crow Indians bent on revenge.
Sarah seeks her true identity as a woman. Two Shadows’ struggles with loyalties divided between his love for a white woman and his devotion to his tribe. Whispering Sun captures a time when the Blackfeet are forced to see their way of life disappear. It’s a story where it’s possible for a white woman to decide she belongs with a loving people and a Blackfeet warrior. It’s a story that shows how a half-breed can choose an alliance and find his place in a colliding world.
"Rita Karnopp has composed both a creative and enduring tale of trials and tribulations that are, oh, too real, and leave an overwhelming impact on the reader. From betrayal, to finding love, she has written a masterpiece that is hard to put down." ~ Cherokee, Coffee Time Romance
Chapter One ~
Dirk sat straight in the saddle, face stretched to the sky absorbing the sun. He scanned the vast valley below. A few scrub trees competed with the brush for a haven from the relentless Montana wind. The brisk, spring air held a hint of warmth that promised the coming of summer.
Movement caught his attention. Stretching up in the stirrups, Dirk observed the rider with interest. Astride a frisky horse, Sarah raced across the open valley, as though both sought to satisfy a need for freedom.
The striking, black mare stumbled. Helpless from a distance, Dirk watched Sarah clutch aimlessly at nothing.
He urged his mount down the rugged embankment, then across the wide stretch of open country. His boots touched the ground the moment his horse skidded to a stop. Rushing to the upheaval of motionless petticoats, his heart hammered in fear.
Dropping to his knees, Dirk gently pulled Sarah onto his lap. He held her against his chest, gentle and protective.
"Let me die," she whimpered.
Dirk barely heard her words. He wished he hadn't. Gazing down at the young woman, her beauty left him breathless. Succumbing to temptation, he wound a long, golden curl around his fingertips. The silkiness made him shudder with longing.
With reluctance, he lowered her back onto the thick, new grass. He feared she couldn't escape injury from so violent a fall.
With knowing hands, he touched, pressed, and probed every inch of Sarah's slender body. So many times he'd watched his father do the same for bronc busters. Dirk's thoughts drifted back to the beautiful picture she'd made, racing across the plush, green valley of spring grass. The wind tugged at her waist-length hair, lifting it free to wave behind her like a golden banner.
He'd watched Sarah come and go for the past two months. She wasn't the reason he observed the activities outside Fort Bryson, but she'd fast become an obsession, haunting his days and nights. 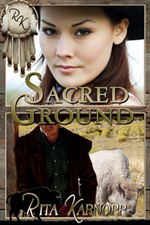 SUNDAY ~ DON'T MISS MY NEW RELEASE ~ SACRED GROUND ~ Get your free download Sunday from Amazon.com   A Books We Love publication.    http://www.amazon.com/ Someone wants Brett Turner’s land badly enough to sabotage him, and he knows just who the culprit is: his neighbor, Willow Howling Moon. They don’t see eye-to-eye on anything. When their sons, who are best friends, run away into the mountains just before a blizzard hits, Willow and Brett have no choice but to go after them—together. In the course of the rescue, they discover an unexpected and unwelcome mutual love. The realization that both their lives are in danger finally convinces him she’s not his enemy. This heartwarming love story is set in Montana.
"A wonderful mix of romance and intrigue that will keep the reader turning pages until late into the night. Karnopp sets out to prove why her hero and heroine are all wrong for each other but in the process creates two characters the reader falls in love with and who ultimately fall in love with one another. But before their romance can really get going they must overcome the danger that lurks behind every boulder. Ms. Karnopp is a rising star in the romantic suspense field and I highly recommend Sacred Ground." ~~Lori Soard, author of Finding Ms. Right      "Brett Turner has mixed feelings towards his neighbor Willow Howling Moon. He blames her buffalo for his cows getting sick, but Willow insists that her herd doesn’t have brucellosis. Brett also dislikes the fact that his son likes to play with Willow’s son. As far as Willow is concerned, Sean is more welcome than his father. However, she admits he isn’t bad to look at, and despite his prejudice, Brett is physically drawn to the beautiful Indian woman. Whenever they meet they quarrel, but inevitably they are drawn together.
This book tells of dreams and legends; of the struggle to overcome fear and prejudice. Beautiful, tender and full of love, it tugs at the heartstrings." ~ Five red roses, Larena, Redrosesforauthors.reviews
Posted by Rita Karnopp at 2:00 AM

Congrats on both books coming out.

Thank you so much, Savannah . . . I remember imagining my name being on the cover of a book, then it happened and the pride and feeling of accomplishment overwhelmed me.

Last night I finished my eleventh book . . . and all those feelings of 'I did it' rushed back to me. Books We Love is such a wonderful publisher. The have recently accepted my proposal for a WWII Tango Of Dealth series, which I will start writing this week. Yesterday they also accepted my proposal for The Ten Commandments series, which will be suspense! I'm totally excited.

Of course before those hit the market, Books We Love will release my other eight books . . . hopefully that will give me enough time to write those thirteen books! What was I thinking?? :) Rita