I have to confess I would never have made a musician or an accountant, because I cannot sing true and numbers go straight through my head. But I have always been able to string sentences together. I used to fancy my essays at school were very good. Then I grew up and all the doubts and insecurities of adulthood rushed in. I realised what a labour and how good you had to be to write a book for publication. Reading was so much easier! And so I read anything and everything. When the urge to write struck again, I wrote Banners of Alba, about a young man in tenth century Scotland struggling to hold onto his birthright in spite of devious uncles and cousins. It was published in 2005 and if I edited it again today it would be a few thousand words less! By now I have learned to be more sparing with my love of words. Over the years I’d read so much history and studied it at university, I felt I could claim I knew my subject. 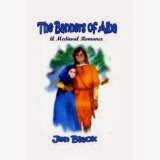 Harriet Klausner liked the book. “Though there is a major romantic subplot, THE BANNERS OF ALBA is more a magnificent medieval fiction that brings to life the twelfth century through the power struggles. Readers will appreciate the internal dilemma confronting the hero as he must choose between two paths filled with deceit. Symbolically the two women in Finlay's life represent the choices he has. As the champion learns that picking what he deems is good for Alba is not necessarily good for him, readers obtain an exhilarating historical thriller starring a hero worth rooting for." Harriet Klausner.

When I started writing it was on a typewriter, the kind that required effort to punch those keys. Then I got an electric model and a few years after that along came the first computer and writing became, in one sense, laughably easy.
When Banners was published I had another story ready to go. This one, Dark Pool, concerned a Dark Pool suffers at the hands of the Dyflin Vikings and narrowly escapes death in the blazing war-torn rubble after an attack by Waterford Vikings. One reviewer claimed this book was too gritty to be a romance, but I leave that to the reader to decide. The hero of Banners, newly proclaimed as King of Alba (the old name for Scotland) sets out, much against his will, and hampered by her argumentative brother, to retrieve her.

In Far After Gold the hero Flane buys the heroine Emer as his bedslave. Surprisingly, (or perhaps not in the land of romantic fiction!) they fall in love and struggle against outside forces that threaten to part them. Katla, the chieftain’s daughter, wanted Flane as her bridegroom and resented Emer from the day he brought her home. When she accuses Emer of theft, Emer runs away and faces all kinds of danger. By the time this book was written, self-publishing was newly on the scene, so I decided to give it a go. The advantages are that I can control everything about the process – change covers, prices, and know exactly what the sales are. 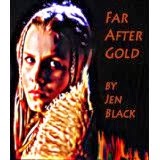 Fair Border Bride first saw life as a paperback with the title Til the Day Go Down, which was a quote from an old border ballad. When the publisher failed, I re-wrote large sections gave it a new title and put the book up for sale on Amazon Kindle in 2011.
Set in 1543 along the border country between England and Scotland, Alina and Harry have only just met when her father threatens to kill Harry because he belongs to the hated Scott family. With the help of Matho, guard captain of Alina’s home, Harry escapes, but their problems have only just begun.Full of wry border humour, this book introduces Matho Spirston, the hero of a more serious historical novel I have out now on submission to agents. Reluctance is published by MuseItUp Publishing, a Canadian company. The setting of the story is very close to where I live and I often walk in the grounds of Gibside estate, now run by the National Trust, and ponder the lives of those who lived there in years gone by. 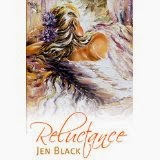 In 1803, Frances is happy with her life as a rich widow until two men appear in the neighbourhood. Jack she knew as a child, but fails to recognise the man he has become. Holgate cuts a fine figure in his regimentals and impresses Frances's mother rather more than Frances. A frightening episode with Holgate leads Frances and Jack to consider a marriage of convenience, but that leads to problems neither envisaged. For reasons of his own, Jack refuses to consummate the marriage and Frances cannot bear it. The penultimate chapter, where she confronts him, strips all emotions bare.

Melanie Grey endured a bitter marriage which ended in an accident that killed her aged husband and left her facially scarred. Unable to claim her dower rights, she travels north to Northumberland in hope of a quiet life as housekeeper to Lord Jarrow. She soon discovers he has secrets, and her curiosity grows. Unexplained night time activity, and a shooting that almost kills Jarrow - can Melanie deal with these things and make a new life for herself in the country?


I’ve walked, ridden and driven through and around all the places I write about, and love delving into the past. Narrow alleyways in old towns lure me in every time!

A quick link to all my books is here:  http://www.amazon.co.uk/Jen-Black/e/B003BZ8JNQ