Christmas at the Bator House 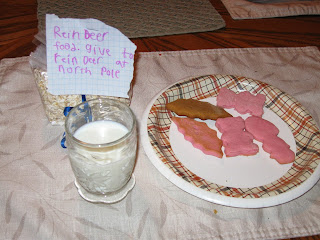 I have made gingerbread cookies for Christmas since long before I was ever married with kids. I still remember my box of red plastic cookie cutters, the same box I got my original recipe from so many years ago. The recipe is now splattered with gingerbread and flour, but returns to the kitchen every year--the ghost of Christmases past--to help me create gifts for friends, family and teachers.
When we moved across Canada nearly 9 years ago, the recipe came along for the ride. That Christmas, I made my dough for both kinds the night before we planned to bake cookies. The dough was drier and more crumbly than in years past. All night, I fretted about whether the cookies would turn out or whether we would end up with a big bowl of gingerbread crumbs.
The next morning, I pulled the dough from the fridge and winced at the cracks. Part of me wanted to throw the dough into the trash. The kids, however, were at the table, cookie cutters in hand, ready to bake. No turning back.
I worked the dough until warm then rolled it out. More cracks. Clumps of dough split apart. I groaned, convinced the recipe was a total failure and I should just give up.
Across the table, three little boys with shining eyes waited. Those same little boys spent the next twenty minutes cutting out Christmas trees, gingerbread men and teddy bears (a stray cookie cutter from another set.) They didn't care if the dough crumbled or it took a little longer to work the dough and roll it out. All that mattered was they were working together to make dozens of cookies for Christmas for our friends and family. They even "called" which shapes of cookies were going to whom and which cookie they would eat first.
As the kitchen warmed, so did my spirits. They were right. Christmas, as the Grinch learns every year in the classic story, isn't perfect nor does it always come from a store. "Maybe Christmas...perhaps...means a little bit more."
The cookies don't turn out perfectly every single year, but they still taste as good. In the years since, the kids and I have created pink peppermint cookies (a slightly altered sugar cookie recipe) and love to try out new treats to add to our homemade Christmas gift baskets.
No one has returned a package yet! 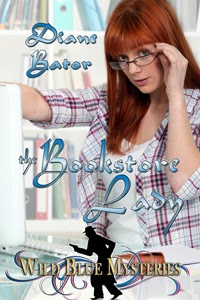 The Bookstore Lady
Wild Blue Mysteries
Danny Walker is tracking Paulina Chourney who fell deep into the dark side of life and is lucky to get out before her boyfriend Maddox kills her. She escapes Maddox and arrives in a small town, which she sees as a blessing in disguise since the men she worked for would never think to look for her in a lazy, backwater place like Packham. She changes her name to Katie Mullins, makes a deal on a little bookstore and joins a local writing group then successfully fades into anonymity. Until Danny Walker shows up to visit family and figures out who she is.
When Paulina catches her 80-year-old landlady Hilda Clayton sneaking out in the middle of the night, the bad guys catch up to her and Danny disappears. Katie has to choose between spending her life on the run or standing up to face her past. Hopefully before the quirky townsfolk turn her death into a spectacle.
The Bookstore Lady Available at:  Amazon:   http://www.amazon.com/dp/B00DWKNGPQ
Diane has been a writer since she was able to hold a pencil and tell a story. An avid hiker, Reiki Master and martial artist, she loves to make a mess in the kitchen and putters in the garden at will. Joining the Headwaters Writers' Group in 2007 was the catalyst for unearthing several old writing projects. Her first murder mystery, Murder on Manitou, was published after winning a writing contest in 2010. She lives in Southern Ontario with her husband, three kids and a cat who thinks he's a dog. To learn more about Diane, visit her sites.
My website: http://penspaintsandpaper.com
My blog: http://dbator.blogspot.ca
Posted by Unknown at 3:06 PM

What a great memory. I remember baking cokies with my sisters and mom. I hope my kids remember baking them with me. I don't bake many cookies these days, but I do make other bakery. Thanks for sharing.