LESS IS MORE BY RITA KARNOPP

She tensed, sending her back into a near spasm that always caused pain to run from the back of her neck down her spine, and ultimately to pit of her back.  Perspiration now led the pathway in the hot, humid, almost steamy, pitch black-as- an-ace of spades night.  Taking in her surroundings, Maylyn move as carefully as a cat down into the dark, lightless alley.  She struggled profusely to keep from stepping on a barrage of old cans, junk wood, broken toys, old broken-down chair, and even a rotting bone.  The snap, no, it was louder than a snap.  The cracking sound brought to mind a gun with a silencer.  She pulled her Glock from the new, black, unused holster and held the cold, black, shining, metal barrel up against her forehead as she proceeded toward the back door.  It bolted open, and a tall, slender, very muscular man wearing black tights and a red and blue Superman cape stood frozen before her.

I have to admit … that was such a struggle to write.  There are so many details that what you really want to show is lost . . . it’s the old cliché, ‘You can't see the forest for the trees.’  You don’t have to describe everything from the nose ring to the maggots on the rotting bone.

The reader just doesn’t have to know everything in a single paragraph.  Right now the reader doesn’t have a clue what’s really important.  That’s the key here, write crisp and exciting.  Draw your reader into the scene so he/she can feel, taste, smell, touch, and experience what is happening right along with them.  So, let’s give this another try. 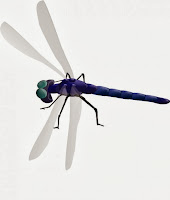 Maylyn’s t-shirt clung to her in the steamy Florida night air.  Catlike, she stepped around the rancid garbage-strewn alley and edged toward the back the house.  A shot rang out.  Maylyn seized her Glock and swallowed hard.  Holding the cold muzzle against her forehead, she inched forward.  A Superman-dressed assailant bolted through the back door, recognized at her, and froze in place.

Yes, I know, this example is a bit strange.  But it makes my point.  Did you notice the two short sentences create intensity?  Also notice that the assailant ‘recognized’ her.  That changes the meaning of the whole scene, doesn’t it?  Be vigilant on describing the scene you want your reader to envision.

Always keep in mind, more details are not always better – less is more.