Through the Fire by Beth Trissel 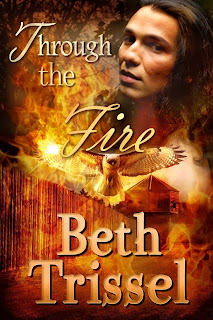 “Kate! Listen to me. We’re riding now! Give him his head! Go!” Rebecca’s shout sliced through the paralysis that gripped her sister.
Kate’s gelding sprang away, galloping past several riderless horses and two warriors who lunged at the reins. Bent low over the horse’s straining neck, she flew across the hazy clearing into the woods beyond.
Wrestling the reins, Rebecca turned her mare in the same direction. “Come on, girl!”
Bare arms outstretched, mouth gaping as he let loose a fierce war cry, a sinewy brave dove at her.
“No!” she screamed, and lashed him across the face with her crop.
He wrenched it away and twisted a quick bunch of her skirts to rip her off the horse. Jerked down by the force, she clung to the saddle with one hand and smashed her fist up under his chin. His head snapped back and she raked his painted cheek with her fingernails. She kicked out for all she was worth and caught him on the chest. He stumbled back, surprise on his bloodied face.
She thrust trembling fingers into the saddlebag and pulled out a loaded pistol. She pointed the gleaming wooden barrel at him and cocked the hammer. “Get away!”
He jumped up and knocked her arm aside. The shot exploded uselessly overhead. The mare whinnied, dancing sideways, pitching like a ship. Rebecca clung shrieking to the sidesaddle. If she fell, she’d be trampled—or worse.
“Hold on!” a man called, his voice deep, arresting.
A soldier? Clinging to the sidesaddle, Rebecca turned and stared in shock at the powerful warrior running to her.
Black hair flying, he dodged a runaway horse. His long legs vaulted over downed soldiers as he shoved other warriors out of his path. “Naga! Ambelot!” Shouting alien words, he seized her assailant and flung him reeling over the grass. The lesser man lifted conciliatory hands and spun away.
Breathless, she met her champion’s black eyes. Did he truly think to help her, or was he just more determined than the other to yank her off? She might get off a clout to his jaw with the pistol butt before she fell.
He extended one hand toward her horse. “Easy. Steady.” The English words and his calm manner had a soothing effect on the frenzied mare. But only for an instant.
Stepping nearer, he reached for the bridle.
Triumphant cries of victory rose around them. The horse tossed her head and reared again, shod hooves pawing the air.
With a despairing cry, Rebecca flew from the saddle and tumbled to the unforgiving ground. Knocked nearly senseless, she lay in a fog. The riotous jubilation reached her as if from a distance. Vaguely, she sensed someone near.
“So fair you are,” a low voice said near her ear.
Strong arms lifted her, and she had the comforting sensation of being safe before blackness claimed her.

Email ThisBlogThis!Share to TwitterShare to FacebookShare to Pinterest
Labels: A Page Straight From, Beth Trissel, Dishin' It Out, Through the Fire, Wednesday Feature