Into the Red by Kelly Whitley 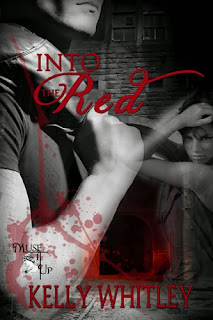 The caged light above the emergency exit cast a pallid purple glow over the alley and the pair coupling against the brick wall. Barely twenty feet away he watched, hunkered down in the murk of the shadows, thinking about the merits of killing them both, or waiting for the girl to be alone.
The bar catered to the darker element; men who came to drink, drug, and fornicate. Dangerous men. Men who committed violent crimes as easily as they breathed. Few women frequented this establishment. Most of the females present worked there as waitresses with benefits for purchase, for the men with sex on their minds.
Management took a cut of everything—the liquor, the drugs, and the sex. He also knew the management dictated who did what to whom and when, so it had been just a matter of time before a pair left the bar for the privacy of the alley.
The guy from inside the bar was clean, well-dressed in something other than biker gear and blue jeans, and wasn’t drunk or high.
Which was better than usual.
Hidden, he watched while the man finished and then disappeared back inside. The girl stayed in the alley. A match flared as she lit a cigarette and walked in tight circles by the back door. Based on his observations, he knew she wanted to attract a customer who didn’t come from the bar.
A quickie.
She didn’t realize she’d just sealed her own fate. It would be a quickie. A hell of a quickie.
He separated from the shadows and approached her from the end of the alley. He wasn’t clean, well dressed, or sober.
Which was worse than usual.
But he did have fifty bucks. He bit back a laugh as he caught the expression on her face—half victory, half revulsion. She took his money, tucking it into her bra before turning to face the rough brick of the building.
He leaned into her, pressing her chest against the alley wall and inhaling the smell of her neck as he yanked up her skirt and entered her from behind. He ran his hands over her body, relishing the feel of her soft skin as he plunged into her, ignoring her little yips of pain.
As he slammed into her and finished, the leech of his addiction demanded satisfaction, and he snaked an arm around her throat. For a moment she didn’t react, then the fragrance of her relief gave way to the smoky scent of panic. She lashed out, connecting with the unforgiving brick wall. Her struggles kicked his anticipation into overdrive, and he sank his teeth into the exploding pulse of her fear.
Within a few seconds, her legs gave out, leaving her limp against the wall; he supported her around the waist. Anyone encountering the scene would assume they’d not yet concluded their transaction. The ache of withdrawal eased its way into euphoria as the Red hit his bloodstream.
With jerky movements, he laid the body out of sight behind the filthy packing boxes before grafting himself to the shadows.
Soon, another couple would exit the bar for an outdoor tryst.
And he’d be watching.

Muse It Up Publishing link:

Email ThisBlogThis!Share to TwitterShare to FacebookShare to Pinterest
Labels: A Page Straight From, Dishin' It Out, Into the Red, Kelly Whitley, R-rated, Wednesday Feature