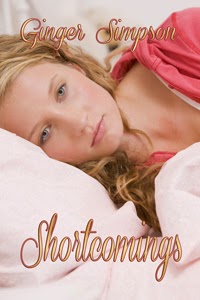 High School is hard enough without the cold stares from classmates that remind you every day how different you are.

Our shortcomings don't define who we are, unless we let them. Cindy Johnson needs to learn that. Born with one leg shorter than the other, she has no self-esteem because of the cruel comments and cold stares she receives from her classmates. When Cory Neil, the football quarterback asks her to Homecoming, she's quite sure he's asked her on a dare and refuses. It takes more than just her mother's assurances that Cindy's beautiful before she realizes she may have made a mistake in turning him down.

What was the impetus behind this book?  For those who don't know, I have an autistic grandson who is now eleven.  I've become very conscious of the way people gape at behaviors they don't understand, and whether they do so knowingly doesn't matter to the person who is the object of the unwanted attention.  My Spencer is a very loving child who is way too trusting and has been known to go up and hug strangers.  He doesn't realize that it's strange because it comes naturally to him, and I'm thankful that like so many children affected by this disorder, he isn't socially stilted and loves to be loved. Still, I'm trying to teach him that while the world is filled with great folks, there are also those who aren't as nice as we hope they are.

My thought was if I could deliver a message that might change a person's way of thinking, I might save Spencer from the bullies that dwell among us.  We are either part of the problem or we can be part of the solution, and I chose to be a messenger to raise awareness.  No matter what age you are, Shortcomings is a heartwarming story and one I hope might make a difference.  With hopes that a teacher might want to use the book in the classroom, I also prepared a study guide that I will happily provide.

Hope you'll pick up a copy or get one for a child, grandchild, niece or nephew.  I trust my message will not be wasted.