On Wings of Desire by Bianca Swan 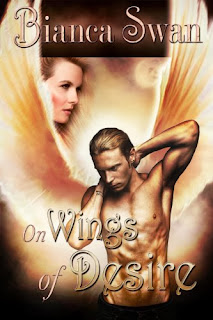 The stench of Hell burned Salseph’s nostrils.  Lost Souls¸ how he hated to return home.  For all his trials on Earth, he preferred the human realm to this insufferable place.  In the mortal plane, he could, with considerable effort and pain, divest himself of his wings, and feel as if he belonged—at least for a time.
Evolerzzal, a slimy glob of green flesh, grabbed Seph’s shoulder as he passed into the gloom of the Demon Realm.  “Well, if it isn’t Salseph the Beautiful.  What are you doing here amongst us humble creatures?”  A clawed hand beckoned Charzzel, a demon of the Second Order.  “Look who’s come home.”
Seph shrugged free, vaulting his wings skyward.  The dim, smoky light refracted on his feathers, and the movement immediately drew the attention of every demon in sight.  His jaw tightened, a muscle twitching.  He yearned to drive his fist into the grotesque face and take to the air, but it wasn’t Evolz’s fault the demons hated Seph.  Paimon had insured that Salseph was an oddity, a freak.  His appearance and the majestic wings set him apart from the others of his kind.  Hell, there were no others of his kind.  In all of Perdition, he was the only demon who looked like an angel.  His face was handsome, his body lean and muscled—the body of a man, not a monstrosity—his blond hair thick and silky.
“I smell angel,” a low-ranking atrocity shouted, his high-pitched voice rasping on Seph’s nerves.
The demons stank of brimstone and ash.  Salseph’s Creator had only missed one detail in replicating a celestial being.  Like an angel, Seph possessed an individual, mysterious scent, the airy fragrance part of his allure.  Unlike an angel, Salseph had no sigil.  A sigil, the angel’s name in Malachim script, was branded in his palm at his creation.  Paimon did not have the ability to bequeath a sigil to his demon son.  The fallen angel had, however, created Seph with an irresistible sexual magnetism.
A disgustingly ugly brute bared his fangs.  A laugh rumbled from the creature’s slavering maw.  He stumbled into Seph, crushing one of the long white feathers trailing the ash-gray ground.  “Hello, Salseph.”  Two taloned fingers drifted down the feathered arch.  “Wish I had pretty wings.”
Seph flinched from the malicious caress, folding his wings in a tighter arch.  The creature chuckled, and anger ground Salseph’s good intentions to dust.  When he landed, he’d planned to hurry to his cave, avoiding another senseless confrontation with his brethren.  The fiends detested him as much as he abhorred them.  It was an effort of will to resist a scathing retort.
“I think he’s hideous,” a demon in the shadows called.  “Angels are our enemies.  Every time I look at Paimon’s favorite, I want to draw sword.”
Jealousy and envy gleamed in Evolz’s yellow eyes.  The demon reeked of the Pit.  Sulfur wasn’t an enticing perfume.  “Now, who would want to spit our lovely Salseph on a sword?”
“Let me pass.”  Seph would have shouldered by Evolz, but touching the creature repulsed him.
“Coming home from another assignment?”  Evolz smirked.
Seph refused to give the other demon the satisfaction of a reply.  He was returning from another demeaning mission with his stomach in a knot and his heart bleeding for a poor human woman whose only sin was falling in love with him.
“Did you eat her baby or pump a little half-demon into her womb?”  Evolz leered, his glob of a head tilted to the side, his hairy ears wagging.
“I don’t consume human flesh.  Now, step aside.”
“Or you’ll do what?  Report me to Paimon?”
Seph flared his wings, striking the demon and sweeping Evolerzzal into a stumbling retreat.  “Sorry, Evolz.”  He drove his wings down hard, rising straight into the sultry, close air.  Voice dripping sarcasm, he said, “I forget how powerful I really am.”
He hovered above the gross blob, his condescending smile goading Evolz to react. The demon glared at him but said nothing, a quick comeback beyond his limited mental capacity. Why were they all so fiendish? One of the monsters tried to capture his ankle. Laughing, he flew higher and, still chuckling, soared toward home. The place I hide. He’d never thought of the dim stone cavern as home. His heart stuttered over a painful beat. He had no home and belonged nowhere.

Email ThisBlogThis!Share to TwitterShare to FacebookShare to Pinterest
Labels: A Page Straight From, Bianca Swan, Ginger Simpson, On Wings of Desire, Wednesday Feature

Thanks for having me on your blog! Bianca