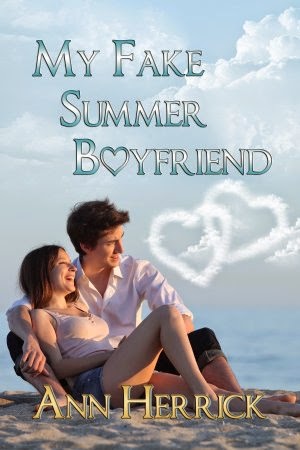 My Summer Boyfriend
by
Ann Herrick


Logan grinned as he led me into the house. "It's a three-story climb up to the turret. But it's worth it just for the view."
The stairway alone was enough to impress me. The wide stairs were thickly carpeted and bordered on each side by ornately carved mahogany railings. Tiny sconces lit the way. They looked so much like real candles that I almost expected them to drip wax.
"Whew! That was some climb." I puffed, trying to catch my breath at the top of the stairs. But Logan was right—the view was worth the effort. I could see for miles.
As I stepped into the room itself I felt as if I were entering a castle. Window seats cushioned with green velvet pillows were built in under three arched windows with crosshatched leaded panes. Pink and purple rays of the sunset flooded the room through the diamond-shaped panes of glass, brightening, for a moment, a room otherwise dimly lit by a single sconce.
"Take a load off your feet," Logan invited. He sat on the middle window seat and pulled me down onto his lap. Out the window I could see the figures of Alex and Nicole on the beach. Alex had his hands on his hips. Nicole was pointing toward the house. I tried to ignore them.
"The sunset is beautiful," I said. Even as I admired the tones of gold and pink sinking in the west, I tried to slip off Logan's lap. His grip tightened around my waist.
"You're beautiful," Logan said. He pushed me back against the soft pile of pillows.
I stiffened as his body pressed against mine. I could feel his hot breath all over my face. His prolonged kiss sent a shiver of panic to the pit of my stomach. Finally he stopped kissing me long enough for me to catch my breath. "Logan. Let's go downstairs, now," I said shakily.
"I'd rather stay here," he answered huskily. "Just settle back and relax." He engulfed my mouth in another kiss. I felt his hand sear a path up my back and fumble with the zipper of my dress. When I heard the zipper going down, I pressed against a pillow, hoping to immobilize his fingers. Logan stopped kissing me. His face was flushed. "Look," he said, his voice shaky, "all this may have started as just a favor to Nicole, but now I really want you."
Want you! The words echoed in my head like a five-alarm warning siren. "No," I said firmly, even though my heart was pounding. "I want to get out of here."
"Please." Logan's voice was pleading, and his eyes had a glazed expression, but he loosened his grip on me slightly.
"I want to go," I said, trying to keep my voice even.
"Take your hands off her!" From out of nowhere Alex hovered over us.

Email ThisBlogThis!Share to TwitterShare to FacebookShare to Pinterest
Labels: A Page Straight From, Ann Herrick, Books We Love, Dishin' It Out Wednesday Feature

Thanks, Ann. I shared on FB and it showed your post with the wrong photo, but once actually shared, the cover did show up. Now I just look like a doddering idiot. *lol* Glad to have you back anytime.