THE KEY TO SUCCESSFUL WRITING IS … HI-JACKED - BY JERRY B. JENKINS

For those who are writers – we get it – writing is hard work.  For those who believe they could write the next best-seller, only if they had the time, are in for the surprise of their lives – if they ever gets courage enough to try writing.

The attached hi-jacked article by one of my favorite authors, Jerry B Jenkins, puts it rather well.  I’m sure you’ll be nodding your head when you read this one!  J Rita

Writing is hard work. Don’t agree so quickly. Wait till you’ve been dragged down the bumpy road toward publication a few times. For now, admit that you suspect you’re something special. The exceptional exception.
For you, writing will be a breeze. Editors will clamor for your work. You foresee a bidding war over your next book, with your bank account the big winner. Is that Reader’s Digest on the phone?
Not so fast.

Guest column by Jerry B. Jenkins who is the author of more than 180 books with sales of more than 70 million copies, including the best-selling Left Behind series. Jerry’s writing has appeared in Time, Reader’s Digest, Parade, Guideposts, and dozens of Christian periodicals. Twenty of his books have reached The New York Times best-seller list (seven debuting number one). He owns the Christian Writers Guild (www.christianwritersguild.com) and Jenkins Entertainment, a filmmaking company. He is also a contributing editor to Writer’s Digest.
I was talking with an editor friend, a veteran of many writers conferences, who has seen all levels of competency. “It’s rare that you find a first-timer who really gets it,” she said. Writing is not a hobby, a spare-time activity, or something to play at. It’s work.
For me, writing is as exhausting as physical labor. After writing and publishing more than 180 books, that still surprises me.
Sometimes, on deadline, I’ll sit at the keyboard for six, eight, ten hours or more. When I’m finished, I’m as spent as if I’ve been ditch-digging all day. I don’t understand it. Writing doesn’t seem physically taxing, but it is. I guess it’s a fact that you must be constantly thinking in order to write.
Creativity will cost you, wear you out.
Don’t ever get the idea writing is easy. If it is, you’re not working hard enough. The stuff that comes easy takes the most rewriting. And stuff that comes hard reads the easiest.
A psychologist friend once asked if I would have lunch with him and give him a few tips. “I’m thinking about doing a little freelance writing in my spare time,” he said.
“Interesting,” I said. “I’ve been thinking about doing a little psychological counseling in my spare time.”
“I didn’t know you were trained for that.”
“Gotcha,” I said.
When you hang out your shingle as a writer, be prepared for unintended slights like that.
People tell me all the time that they have a book in them, if they only had time to write.
That would be like my saying I have a sermon in me, if only I had time to prepare it. Pulpit work is something a person is trained and set apart for. 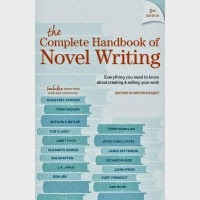 If people want to tell themselves they could be the one-in-a-thousand writer who could sell a manuscript to a book publisher, if they could only find the time, fine. They’ll learn the truth when they sit before the blank computer screen.
So don’t be one of those who just talks about it or plays at it. Work at it.


Get more advice from Jerry B. Jenkins & other bestselling authors by picking up your copy of The Complete Handbook of Novel Writing, 2nd Edition.
Posted by Rita Karnopp at 1:00 AM