Let your characters guide you - by Rita Karnopp 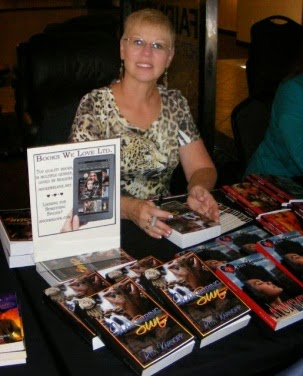 Before we begin typing that first word - we always (or most times) have the ending in mind.  There are a couple books I had an idea of what I wanted my end result to be – how I got there was something of a mystery.  My point – we don’t always end up where we think we will.
You must be willing to adapt . . . make changes, be aware of the flow of your story.  Never . . . never . . . never . . . cling to your synopsis because it was how the ‘story was supposed to go.’  Really???  I believe a story never goes the way I planned – I have to be open for my characters to surprise me.  And boy – do they surprise me!
Make your really good story idea great by a willingness to adapt as the story unfolds.  Each character develops as he/she unfolds in your story.  You can’t force a character’s behavior.  Always allow him/her the ability to act/react in a natural way.

Be open minded while writing - Keep in mind – what works for one book won’t always work for the next.  Characters in each book are different and you must always let them lead you through each scene.  Listen to them  . . . and give them free rein!

Release the control. You know you’re a talented writer. That doesn’t mean you’re instantly good at letting go – giving your character permission to be him/herself.

Never start writing a book with ideas set in stone.  Guidelines will keep you from writing yourself into a corner, but don’t be so controlling you won’t allow something unexpected to happen.

Allow your characters to laugh, cry, have highs and definitely lows.  Make them feel . . . and the reader will respond.  By allowing your character a ‘voice’  - the dialog will flow with ease and belief.  Step in because you don’t like the direction and your reader will be jerked out of the scene – maybe forever.

Believe in your characters. As I said at the beginning, we don’t always end up where we think we will.  That’s the good news!  When your character surprises you while you’re writing – it surprises the reader.  Some of my greatest scenes were created by my characters; their personality, reaction, and drive or direction leading them to places only they can imagine.  Trust them – you’ll love where it takes you!

The world of professional wresting is a volatile, exciting, and action-packed world and even more so behind the scenes. Keme (Thunder), a Blackfeet fan favorite wrestler at the top of his game, is found hanging from the rafters of his training facility.  Is it murder . . . or suicide?

Find Rita at:   ritakarnopp@bresnan.net
Posted by Rita Karnopp at 11:00 PM

I wish I had an ending in mind. As a Pantser...my characters tell me the story as it develops and I never know where I'm going until I get there. The only problem...when the story is done...it's done and there is nothing I can do about it. This is why I could never be published mainstream. I can't count on writing to word requirements...but I like my style of shorter stories.