I Dug It! Remember Me by Kelly Janicello

Remember Me? by Kelly Janicello is Kelly's debut novel and it's absolutely amazing. Romantic suspense just the way I like it, characters with a sense of humor, with some very hot romance thrown in. The heat level in this one is similar to my A Cop in the Family series, a little steamier than mainstream, which I enjoy.

Ryli Madigan is a rookie cop who is thrust into the big leagues by circumstances. She’s smarter than she gives herself credit for, possibly because she has some demons she’s battling.

Brody McKenna is my kind of action hero, sexy, protective, and too damn funny. He knows what he should do, but it’s not always what he wants to do. Fighting a few demons himself, it’s only when the two join forces that either one of them can figure things out.

I highly recommend Remember Me? and suggest you allow a few hours to read because once you start, you won’t want to put it down.

Remember Me? by Kelly Janicello is available at Amazon here:  http://www.amazon.com/dp/B00LH76XE2
or by request at a bookstore near you! 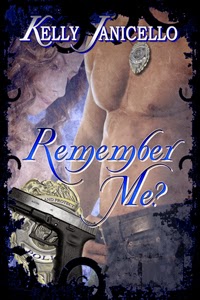 As a child, Ryli Madigan witnessed a heinous murder burying it deep in her mind. Years later as a rookie police officer she takes down an armed suspect in a convenience store and finds herself assigned to the Detective’s Division. She must work with the veteran detective shot during the robbery she thwarted. Ryli clashes with Brody McKenna, who pursues her on a more personal level despite his deep-seated mistrust of women.

While tracking a serial killer Ryli is plagued by haunting nightmares. The stakes grow higher as she and Brody uncover a cold case involving her family concealed by one of their own. Brody suspects her terrifying dreams are really flashbacks. Their personal attraction raises the stakes in their pursuit of the man responsible for a murderous spree. Will Ryli remember her past before it’s too late?