Friday is the 13th. Oh, joy…There are two months this year with a Friday the 13th in them, the second month being October. I don’t know about you, but sometimes Triskaidekaphobia and Paraskevidekatriaphobia pull me up short. (That’s the fear of the number 13 and fear of Friday the 13th. And, yes, those are real words. Honest. I didn’t make them up.)

The tradition of Friday being a day of bad luck dates back centuries with some of the more common theories are that the Crucifixion of Christ occurred on a Friday (Good Friday and I will attempt to keep my father’s voice from sounding in my head with his in poor taste joke about what a way to spend Good Friday), Eve is rumored to have offered Adam the apple in the Garden of Eden on a Friday, and the great flood is also supposed to have begun on a Friday. 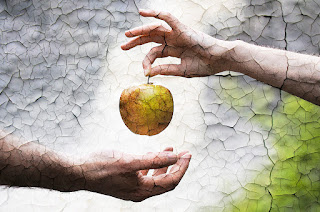 The Last Supper is the main source for the tradition of the number 13 being bad luck. Judas Iscariot was the thirteenth person to be seated at the table, and if you’ve read your Bible, you kinda know how that worked out not only for Judas but for Jesus.

Combine these two bad luck symbols and you get a day strongly associated with bad luck and misfortune: Friday the 13th.

One legend of the origin of Friday the 13th as being unlucky belongs to the Knights Templar. For almost two centuries, the Templars dominated medieval life. They protected pilgrims on the way to the Holy Lands, made safe the roads those pilgrims travelled, began a sort of banking system so a traveler didn’t have to carry massive stores and riches with them as they journeyed the less than safe roadways, and became so rich and powerful that they could and did challenge the authority of Phillip IV of France and Pope Clement V. Both men were deep in debt to the Templars. On Friday the 13th, 1307, Phillip ordered all Templars arrested and their property seized. The Templars were accused of witchcraft. Unfortunately for Phillip, many of the Templars had been told beforehand of his plans and they escaped, but not after hiding vast stores of treasure which the King’s men never found. (Supposedly, there is a huge Templar treasure hidden on Oak Island, somewhere off the eastern coast of Canada.) 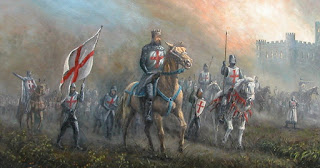 The Grandmaster of the Order, Jacques DeMolay was one of those captured. He was tortured and then burned at the stake. DeMolay refused to admit to any wrong doing and denied up to his dying breath he was guilty of witchcraft. One of the legends surrounding DeMolay’s death is that as he was being consumed by the flames, he cursed both Phillip and Clement, saying neither man would live out the year. Interestingly enough, both Phillip and Clement died within months of DeMolay.

Did his curse come to fruition or were Phillip and Clement helped along to their eternal rewards by Templars who had infiltrated the ranks and sought to avenge DeMolay and prove his innocence by making that curse come true? For what it’s worth, my money’s on the Templars. 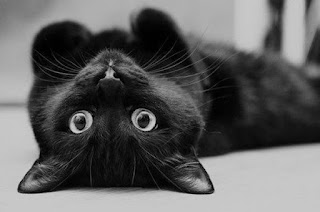 Just to be on the safe side, this Friday I’m going to avoid ladders so I don’t inadvertently walk under one, my poor cat is going to have to live without me for a day (Teak is a black cat), I won’t touch a mirror so I don’t risk it breaking, and knock on wood, I’ll get through just another day on the calendar.

Email ThisBlogThis!Share to TwitterShare to FacebookShare to Pinterest
Labels: Friday the 13th, Superstition