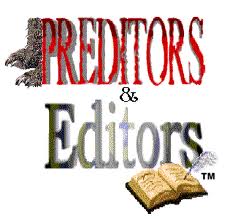 Now that the Preditor & Editor Poll has concluded, we can all take a deep breath and enjoy not being hounded every five minutes by someone asking you to "vote for my book."  Years ago, as a new author, I was excited when someone nominated my debut novel.  To see my first work listed among a myriad of other books made me feel accomplished...more so than just being published, until I found out that people were self-nominating.  You didn't have to rate any type of recognition for having written a profound novel or compelling read, and votes could be commanded, begged, and even stolen if you count that some people thought it was all right to vote under more than one email account.   If I recall correctly, I didn't finish very high in the rankings, but then as a new author, I didn't know many people so I couldn't compete in the popularity contest that P&E became.  I voted only in categories I felt qualified for my vote...author's page, publisher, editor, cover artist.  I didn't feel it was fair to vote for a book I hadn't even read.

The pattern has continued each year, and I've watched as the number of entrants dwindle.  There used to be four times the amount of authors entered and even more emails flying around, soliciting votes. I was one who sent them...even nominated myself one year.  I didn't win, but would I have been proud of being honored if I had?  The top ten winners in each category proudly displayed their badges on their websites, noting an honorable accomplihsment.  Was it?  Or had they just let the world know that they spent countless hours hawking votes and were awarded for having the most convincing plea or the largest amount of friends?  Is that what most contests have become...trailer awards, cover awards, best book review.  How often do you see emails where people are asking for your support?  Do you give it?

Even peer reviews have come under scrutiny.  The "liking" and "tagging" pleas for books on Amazon, along with reviews written by friends of the authors, have caused those who are purely readers to question how valid a review given by another author can be.  I've written a few reviews on Amazon for books I've read, but I admit to tagging and liking some I haven't.  Is that honest?

This year, being part of a new publisher with tons of fledgling authors, the loop was flooded with excitement and endless scrolls of "vote for me in the P&E poll," "no, vote for so and so," even, "I'll back out if you vote for this person so he can win."  I tried to express my opinion and ended up being flogged on the readers loop for dimming down what should be a joyous moment.  As I watched from the sidelines with a bitter taste in my mouth, I realized, winning or losing didn't really matter to most, it was about camaraderie, family, and support.  If you believe in your publisher, you must believe they contract only the best work, so why wouldn't you support your peers.  I didn't advertise that I voted, but I did.  I supported my publishing families...two of them, and although it was difficult in some categories where several author sisters and brothers competed, I actually read samples on Amazon before I voted for work I hadn't read.

I suppose whether or not you vote in any of the ongoing contests is a personal choice.  I've voted for friends who have asked me, and I've probably asked for a few votes here and there myself, but really, do I want my videos to be judged by the number of friends I have or by the work that went into the product?  Do I want to be deemed the most worthy of an award because I spent more time sending out emails?  I don't think so.  My trophy cabinet may remain bare, but I'll still have my foolish pride, won't I?  Winning a contest is sort of like winning the race...you have to break the ribbon first.  No steroids allowed, and the judges watch you like crazy.  I like the surprise nominations...ones you know nothing about and can do nothing to manipulate.  Those are the ones I want to win.  Dreaming, aren't I?

I'm interested to see how others feel.  Has being in the industry for a few years changed how you view contests or am I the only skeptic?