Poodle Talk #6 Is Your Poodle a Wild Sleeper or a Snuggler? by Connie Vines

As you know,  I belong to several fb poodle groups and poodle-fostering/rescue groups. 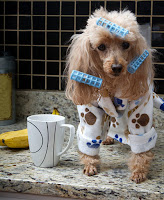 We began a conversation about whether or not 'our' particular poodle, or poodles, had to 'touch' you while sleeping.

Of course none of these findings are verified by animal behaviorists,
or supported by any Random Poodle Polls.

Of the 225 comments, pictures, etc.  Not one person stated the poodle slept in a 'dog' bed/ kennel,  or even at the foot of the bed.

Mind you, several poodles claimed a pillow to rest his/her head upon (probably from a now pillow-less human).

Several poodles snored, others were loud dreams, some twitched, while others complained when his/her human claimed more mattress-territory (me) after spending half the night trying not to slide off the edge of the mattress and land on a pile of discarded toys.

So is your poodle a 'Wild Sleeper", or a "Snuggler"? 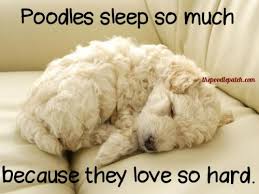 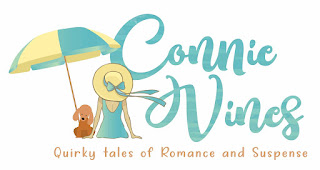 Let your conduct be without covetousness; be content with such things as you have. For He Himself has said, ‘I will never leave you nor forsake you.’” Hebrews 13:5.