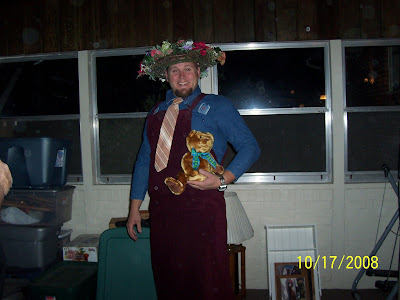 If Mohammad won't go to the mountain, the mountain will come to Mohammad, or something like that. I laughed so hard at my nephew's blog that I got teary-eyed. He has a great sense of humor, but sadly, some of this rings a little too true. I asked his permission to share it with my readers. If you want to follow his offerings, you can find him at The Ballad of Dimes McDropperson

What's in line for '09!
Here in Iraq , we are an hour away from 2009 and I though I would make some predictions for the upcoming year. It can’t possibly suck as much as last year…. Or can it?

January – Barrack Obama’s inauguration goes off without a hitch. The media broadcasts the fresh, young President as a savior to lead this county out of the darkness caused by President Bush. By February, his weak stance with Iran not only allows for them to continue to produce nuclear weapons, but also to move three brigades of troops into Syria for “Training Exercises” along the Israeli border. OPEC will cut oil production once again, citing “regional instability,” driving the price per gallon of gas up to 5$ in the US . The Media blames it all on President Bush’s “failed” foreign policy.

February – Israel decides to quell their other issues, as to concentrate on the Iranian troops amassed at the Syrian border. When Ehud Olmert is finally displaced, the Israelis re-elect former Prime Minister Benjamin Netanyahu, believing he will bring with him a tougher stance on those who provoke Israel . In his second day in office, a rock is thrown at an Israeli troop near the Gaza fence line. By sundown, after an Israeli assault, the Gaza Strip ceases to exist. The Media blames it all on President Bush’s “failed” foreign policy.

March – an illegal immigrant in the Arizona desert, after being startled by a Border Patrol agent, trips and falls, hitting his head on one of the 100,000 new water fountains installed for their safety. He then sues the Homeland Security Department for 500 million dollars. The Democratic Congress temporarily suspends the law enforcement power of the Border Patrol. The population of the US grows 20% and the population of Mexico falls 45% by months end. The Media blames it all on President Bush’s failed foreign policy.

April – A student at a Los Angeles middle school pulls a knife on his teacher. When the teacher restrains the student and disarms him, his parents are outraged. They launch a lawsuit against the school district and the teacher for violating the illegal immigrant student’s right to bear arms. The family wins and the teacher is jailed for abusing a minor. The Media blames it on President Bush’s “No child left behind” act.

May – At a High School in San Francisco, a student is not allowed to graduate. The student skipped 50% of his classes and failed most of them. The parents of this illegal immigrant, homosexual student are outraged and sue the school district. The parents eventually win, the student graduates and has a scholarship to Stanford University , paid for by the School District . He never shows up. Once again, the Media blames it on President Bush’s “No child left behind” act.

June – I am fired from my company and kicked out of Iraq when I fail to kneel in prayer. President Obama’s general order for the military to participate in all aspects of Iraqi life, as to not offend their culture makes, this a requirement. As I learn that I am being terminated, and failing UCMJ action, I run through the streets of Baghdad (In the green zone, of course) with a pound of bacon around my neck, wearing only my Chelsea boots, sunglasses and toting an Israeli flag. I spend 4 months in Germany recovering from multiple gunshot wounds. The Media blames it on…… you know the deal…

July – Russia decides it is time to take back the territory lost in 89 with the fall of the USSR . The offensive takes back Latvia, Belarus, Lithuania, Estonia, Poland and the Ukraine. The United Nations, as always, asks the United States to stop the Russian Offensive. President Obama calls for economic sanctions and a meeting with Russian President Medvedev. At the meeting, Obama trades Estonia for Alaska and 2 Islands in Hawaii . Guess who the Media blames?

August – The dollar falls to a record low at $4.13 against the Euro. Mexico lobbies the US Government for financial aid, citing that the US dollar funneled into Mexico through illegal immigrants is not enough to sustain their economy. President Obama allocates 1.3 Trillion dollars in foreign aid, 98% of which goes to Mexico .

September – All US Troops are withdrawn from Afghanistan and Iraq. Within two weeks, Al Qaeda regains control in Iraq, slaughtering thousands who complied with the “Infidels.” They immediately form an alliance with Iran and now have unlimited funding for training and weapons. Israel readies its nukes. President Obama, under constant pressure from George Clooney, Ben Affleck, Susan Sarandon and Tim Robbins, re-deploy the troops into Darfur to suppress the warlords currently in place. The Military does this in three days and President Obama allocates them as a peace keeping force under UN control.

October – In the first nuclear aggression since 1945, Pakistan becomes a parking lot when India grows tired of the bickering. India then loses thousands of soldiers to radiation poisoning after sending them into what used to be Pakistan to try to rescue sick or injured cows. In Canada, the French influence, looking for an economic boost, allows permission for the Russian military to use the open lands of British Columbia, Alberta, Saskatchewan and Manitoba for mobilization exercises.

November – In a desperate move for cash, Mexico invites Iran and Venezuela to train its military in the desolate regions north of Mexico City . The United States finds itself surrounded, sitting between Russian and Iranian/Al Qaeda military elements. With 90% of the United States Military is currently deployed in Darfur, the US only has two Brigades of National Guard members left. The National Guard members are called in from the California Desert , where they were sent by Congress to set up a perimeter fence around the entire Mojave Desert to protect the Joshua Tree and other vegetation.

December – The US economic outlook is bleak, there is no control at the borders and the America is looking at a two front war with no Military to fight it. As the Russians and Iranians start preparing for mobilization, President Obama receives a letter which states.

We told you so…