A hero by default?? That's what I get when I let him loose on his own... 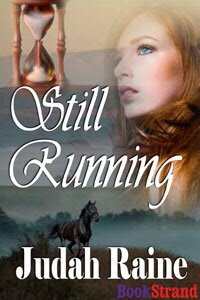 This is a rare opportunity for me and although I’m feeling a little out of my depth (it’s a bit like being the lion in a den of Daniels) it’s quite a novel experience. Oh my – no pun intended.
Oh, right. I forgot to introduce myself. I’m Cade Harper, and I suppose you could call me the hero of the piece – Still Running that is. I think I got to be a hero by default seeing as you could say I’m Josie Tate’s romantic interest. (That sounds a bit lame I know, but you have to remember that I’m a man in a woman’s world here!)
Anyway, as I was saying… I got to be a hero by default. I’ve never considered myself much of a hero. Actually I’m just a normal South African man leading a normal South African man’s life on a normal South African farm. Until Josie blew in, that is. And blew “normal” right out the window.
The thing is, back on the farm things like that just don’t happen. Life has its own routine, you know, and it’s good. I come from a close family, and we run the stud together as friends, and things seemed that they’d go on like that always.
Regrets? Hell no! Josie Tate was the best thing that ever happened to me, though she didn’t think so and gave me a real runaround. Still, it was worth it. But I have to say that from the minute she arrived on my doorstep, life was never the same again.
There were times, though, that I was close to just giving up and walking away. You have to see if from my point of view – I’ve always had a fair amount of attention from the opposite sex. And to suddenly find someone who backed away from the word go, who wouldn’t let me in, wouldn’t let me near… well, hell, any man would sometimes wonder what he thought he was doing still hanging in there.
That’s where Judah was a great help. She kept swinging things so that, even though most of the time I didn’t know what the hell was going on, there was something that kept me going. And not just the children, mind you. Other things, other people… Okay, I’m on strict instructions not to say too much here, so you’re going to have to find the details for yourself.
Let’s just say that personally I think it’s a story worth telling. I know I’m biased, being in it and all, but it has all the right ingredients – a good story, a murky past and dark secrets, obstacles and a good handful of interesting people. And it’s set on my stud farm, which I happen to think is the most incredible place in the whole world…
And what was it like sharing the limelight? Actually it was quite easy, except for all the other people rattling round in the same space. They got on my nerves a bit now and then, because if you’re going to have someone write your story then you want all their attention. Still, I’m a patient kind of guy and I know that everyone probably feels the same.
She could get a bit irritating now and then, though – wouldn’t leave things alone. I’m not a “make a noise” kind of guy, and emotions… well let’s just say that it wasn’t always easy to just put it out there. I think women are a lot better at it than men, most of the time. But Judah was patient, most of the time anyway. Occasionally she’d put her foot down with both hands and make me spill it, just like it was. I haven’t read the book myself though – not sure that I want to actually see myself feel things if you know what I mean.
Still, it’s worth reading. I think what I like about it is the “hope thing”, you know. The possibility of better things, and I know from first hand experience what real love is – how it changes you, and how it can reach into places you didn’t really know existed.
So what is Still Running about? Well I think it’s a story about love, and it’s power to heal. I think Josie’s story, and mine I suppose, is about having the courage to fight and to overcome, to hang in there when things seem impossible. But it’s also about a lot of other things, except you’re going to have to find those out for yourself…
I’m going to duck, I’m afraid – horses to see to and a certain very gorgeous, definitely serious heroine as well. Gotta make sure those running shoes are still well hidden…
Oh, I almost forgot. Still Running is available on: http://www.bookstrand.com/product-stillrunning-13915-330.html
Posted by Unknown at 9:06 AM