Raven Lenore Talks About Her Life... 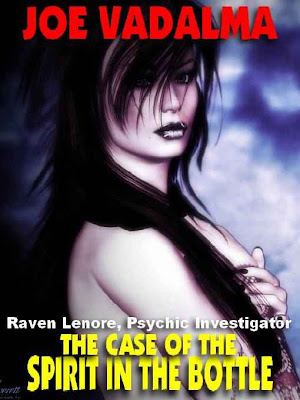 My name is Raven Lenore. I am a psychic, a Wiccan and a private investigator. My psychic powers are not great; mainly I have premonitions that come to me as dreams. I am a private investigator and my cases usually deal with the paranormal. As far as being a Wiccan goes, I view it as a spiritual journey when I became disenchanted with the mainstream paternalistic religions.

Up until I started college, I was a pretty normal person. It was there that I met Morgaine Fabiano. We were roommates and became fast friends. She was the one who got me hooked on witchcraft. I didn't know it at the time, but she was a real sorcereress and could do black magic.

I quit college in my second year and joined the army. I was assigned to a military police outfit. My hand-to-hand combat instructor was Keith. We hit it off and became lovers. After our tour of duty was over, I joined the Chicago police department and Keith opened a martial arts school. I became disenchanted with police politics, and Keith's martial arts school was not doing well. As a result we decided to open a private investigation agency. I resigned from the police, and Keith closed his martial arts school. As PIs, I supplied the brains, he the brawn.

We did not do well until a monied woman by the name of Melody Ellul hired us to find her missing husband, Michael. Well, we got more than we bargained for. The case involved psychic manifestations, crazy people, an android, car chases, graveyards, a haunted house, Stonehenge and demons. One of the demons was my old friend Morgaine, who I had lost touch with by this time. How she became a demon is a long story that you could find out about by reading Joe Vadalma's Morgaine series.

Since that time my life has been a whirlwind of unusual case involving the paranormal. I've since broken up with Keith and had several other lovers, been sentenced to life in prison for a crime my doppleganger committed, explored the sewers of Chicago, became a priestess for a cult involved with bringing about the end of the world, been haunted by a powerful sorcerer of the eighteenth century, made friends with a vampire and fallen in love with a man who is part beast.

So you can see that my life has been anything except dull.
Posted by Unknown at 5:00 AM