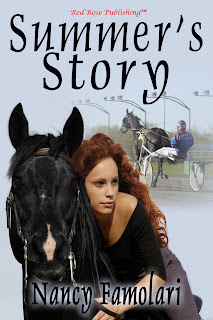 Summer Langston's father is dead. She blames Ned Granger,owner of Golden Oaks Farm, and herself most of all. Her father was an out of control alcoholic even though he was a famous trainer. She doesn't want to believe it. She could have done more to save him. Now all she has left from her father's outstanding career as a racehorse trainer is a potentially great trotting mare, Meadow.

Ned offers Summer a home a Golden Oaks, but without her father, she won't stay. Davis Clayton, a famous racehorse driver, offers help, but Summer wants to make it on her own. She's got grit, but does she have enough experience training trotters to get Meadow to the winners circle at the Hambletonian Oaks, the world's most famous race for three-year-old trotting fillies?

Summer is very inexperienced with men. Her father chased away her would be lovers. Now she's twenty-seven. Two men vie for her attention, but she's not sure which one she loves, which one she can trust. Will she learn to trust and will she find true love. Read Summer's Story by Nancy Famolari and find out.

Posted by Nancy Famolari at 6:00 AM

I remember reading the story when Nancy sent it off to Red Rose and what struck me right off was the main character's title: horse breeder. What a different side to explore.

Thanks for dropping in Lea and Deb! It was a great book to write. I had fun. Now I hope the readers enjoy it!