An Unseelie Sort of Day 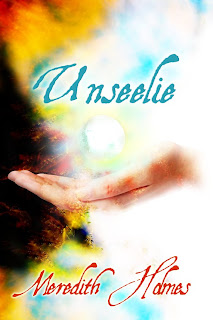 For Bring a Character to Blog week, some of the characters from my new book Unseelie have come out to play.  First in line is Alfhild, the heroine and a human woman like many of us.  Next in the queue will be Du, Jenny Greenteeth, and Cadfael will be along later! They really had a life of their own during the writing process and I'm thrilled to let 'em loose here on Ginger Simpson's blog!  Find Unseelie here at this link!
Alfhild:  How to begin this? Okay, it's like this...  A naked man showed up in my backyard one day and everything went kind of pearshaped after that.  He wasn't a man, really.  I mean... he had the bits and stuff but he wasn't human.  He's a Sidhe.  An Unseelie Sidhe, to be exact (what's the difference, you ask? So did I and boy did I find out!)  It seems that I was marked even before I was born to be part of this whole affair.  I thought I had problems in my human world: a crazy step brother who literally  got away with murder and thought I should be his, an assumed identity, and a best friend who saw a mystery in every shadow.  I had no idea what Cadfael (that was the naked guy) would bring into my life.
See, I left Louisiana a few years before this all began.  My step brother Gulliver had done some really bad things and wanted some really bad things, so I ran away.  Not exactly the most grown-up decision I've ever made, but there ya go.  I ran all the way to England, to a house my grandmother left me in her will.  It had been in our family forever it seemed and Granma had always told stories about it.  Granma, even before she kind of lost her mind, was full of stories about magic and mystical symbols and beings.  I didn't think much of it until Cadfael...
Ever since that day in the garden, my life hasn't been the same.  I'm not just Alfhild from Louisiana, or Lorelei (my assumed name, the one I thought could hide me) from America.  I'm Alfhild of the Seven Snows and Cadfael is....well, he's still Cadfael.
Cadfael: What's that supposed to mean?
Alfhild: This isn't your turn.  Your turn is later.
Cadfael: You need to tell them the entire story, otherwise it'll sound like I'm some deviant faerie who wandered into your ward for the sole purpose of flashing you.
Alfhild: It's not even close to that!  Though I have to admit I did think that...
Cadfael: See?
Alfhild: The thing is, he did show up naked in my garden but there is much more to the story than that.  There are things in the universe you can't even begin to imagine, things that humans have all but forgotten, just waiting for us.  Waiting for me, it seemed.  And a war is going on just out of reach, just past our line of sight, a war that is about to spill over into the human world and a war I'm supposed to help stop.  Cadfael thinks I can do it.  But really... really, I'm not so sure.
Cadfael:  There.  Was that so difficult?
Unseelie by Meredith Holmes is available at Drollerie Press, Mobipocket and Fictionwise.   You can find Meredith on her website, www.meredithholmes.com or Facebook and Myspace.  The blog is a better bet, though!
Posted by Meredith Holmes at 7:45 AM