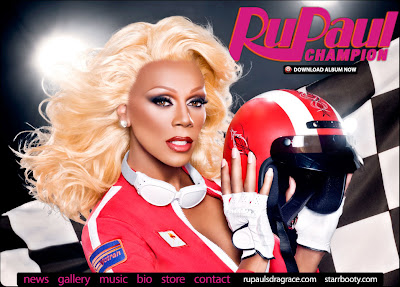 Okay, I admit. I've gone from politics to watching reality shows, and I'm thinking those of us addicted need a support group.


I started with logical choices like Survivor, The Amazing Race, The Biggest Loser, and Dancing with the Stars, but now I've migrated to the darker side. I can't believe I'm TVOing Bret Michael's Rock of Love, I Love Money, The Tool Academy, and sadly...this should prove I'm an idiot...Rupaul's Drag Race.

America, you do NOT have to be intelligent to be on TV. These shows prove it, and I think I'm glued to the screen because I can't quite believe how idiotic people get selected for these shows. For example: Most of the cast on I Love Money already have silly screen names from being on other shows...yes, I watched them, too. Ones like I Love New York (That's a person) and Flavor of Love, a continuing saga of beautiful women trying to win the affection of a really ugly, black man who wears ridiculous clothes and a big clock around his neck. They have names like Becky Buckwild, Buddha, Tailor Made, Six Pack, Heat, and Prancer...you get my drift. Yesterday, Heat was eliminated, and after he cried for ten minutes he said he felt 'betrayted.'

I'm amazed at how indignant they become when someone actually tries to play the game instead of maintaining an 'alliance' OR in the case of Bret Michael's, a forty-year-old rocker has been who wears more eye make-up than his female troop... how the women join a caravan of others trying to win Bret's affection and get pissed when he plays tonsil hockey with someone else. I can just imagine how proud the children of these women are to see their mom's dressed like hookers, dancing drunk on bars, and proudly showing their 'chesty' investments. This is the third season, so I guess his previous choices haven't panned out. Gee what surprise! Have these women no pride? Don't I?

The Tool Academy boasts obnoxious males enrolled by their girlfriends in an attempt to turn them from 'tools' to gentlemen. The graduate must pair with his woman to achieve victory in challenges, attend sessions with a therapist, and earn all merit badges to win a hefty chunk of change. The season just ended this week, and while the groom commented on his 'free' televised wedding ceremony, he seemed really lacking in one area when he mentioned the harp player. I believe his exact words were, "Some guy playing with a harpoon."

Then there's Rupaul. He/She is an ugly man but a beautiful female impersonator. The show is a competition among his peers, and I'm confused when he calls them dolls, girls, and ladies. They constantly call each other 'bitch' and what bothers me most, is I couldn't look that good if I spent a week in front of the mirror. A panel of judges are most serious when they consider who meets the weekly challenge set before the contestants by Rupaul. In the end, the lowest ranking two have to 'lip-sync for their life'. One will receive Rupaul's mandate, "Shantay, you stay," or "Sashay, away." I've picked my favorite for next week's finale...I know who should sashay away. *lol*

Why do people with limited mobility apply for shows that have 'race' in the title? And if you've ever watched a season of survivor, you sort of know what to expect..or you should. How weak to make the cut and then quit. And the final announcement at the end of the weekly weight loss challenge..."I'm sorry, you aren't the biggest loser." Yes you are! You didn't win. Is it any wonder I need serious counseling? Between commercials and the actual programs, my brain is fried.
Posted by Unknown at 5:00 AM

Sadly, my kids love Shot at Love with Tila Tequila...I stick with Survivor!

I'm with you...some women just have no pride. They just want their 15 minutes of fame.

They should give the girlfriends on Tool Academy therapy sessions. Why the heck are they still dating those tools!?!

I like Amazing Race and would love to be a contender on it. The other reality shows you can keep. I can't even stand American Idol.

I love Survivor and the Amazing Race, but I could never be a contender...I hate bugs, running, and sweat. :)