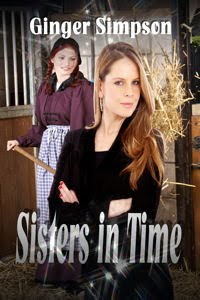 I'm very proud of Sisters in Time. I loved it when I wrote it, and the re-release is even better. I got great reviews the first time around, but it didn't get the exposure it deserved. I'm thankful to Eternal Press for re-releasing it, and I'd like to share an excerpt with you.

Two eras collide when a modern day attorney and a pioneer wife find themselves locked in a time not their own.

Mariah Cassidy awakens in the twentieth century. Confined in a pristine environment, hooked to tubes and beeping machines, she’s scared, confused and wondering why everyone keeps calling her Mrs. Morgan. Who is the strange man who keeps massaging her forehead and telling her everything is going to be alright?

Taylor Morgan tries to focus on her surroundings through a blinding headache. The patchwork quilt, the water basin, and the archaic room don’t strike a familiar chord. Her mouth gapes when a handsome man waltzes into the room, calls her darling, and expresses his delight that she’s on the road to recovery.

Clearly something is amiss.

Mariah Cassidy sat on the front porch and watched her husband, Frank, ride through the gate. The large Rocking C, the ranch’s emblem, cast a shadow across his face as he rode beneath it. His muscled thighs gripped the flanks of his huffing, black stallion, and his hat rested in that familiar rakish tilt. He certainly knew how to sit a horse.

Frank dismounted and gave the horse’s reins to a hired hand. He dusted himself off then turned and strode to the porch. “Good morning, sleepyhead.”

She smiled. “You were up bright and early. Would you like some breakfast?”

“No thanks. I already ate with the ranch hands, but... I might be interested in somethin’ else.”

Even after seventeen years of marriage, Frank’s innuendo embarrassed Mariah. Just a wink of one of his heavy-lashed, blue eyes made her heart flutter, but her desire for lovemaking never equaled his. She fretted about him leaving her to find satisfaction in the arms of another. Her mother had planted such deep-seeded inhibitions within Mariah that nudity made her uncomfortable. She loved being in his arms, but beyond that, her embarrassment got in the way of feeling free.

The same old thoughts niggled at her as she gazed into his face. Why didn’t she feel the same comfort with her body as Frank did with his? Would he be happier with someone else? He deserved a wife with passion to match his own. She massaged the creases in her brow.

“Mariah, did you hear me? Would you like to join me upstairs?” He nodded toward the house.

She held up a silencing finger while guilt niggled her. “Hush. The children will hear you.”
* * * *

Lost in thought, Taylor Morgan sat and stared at the stacks of files piled on her large mahogany desk. The sun barely peeked through the office window of the high-rise building and the dim lighting matched her somber mood. Had she remembered to kiss David before she left home? It seemed she was always in a hurry these days. Rushing to put on make-up, darting off without goodbyes, working late, and barely finding time for her husband—something had to change. She didn’t want a repeat of the argument she’d had with David last night.

The thud of his fist on the dining room table echoed in her head. When he expressed frustration, her body trembled, much the same as the silverware had. She’d never seen him so angry.

His words had cut through her like a knife. “We’re like ships passing in the night. All we do is work, eat and sleep. You’re so busy with your job, that’s all you think about. You don’t cook, you don’t clean... Good God, we only make love on your schedule, never mine. What if I don’t want to wait five years to have children?”
The thought of having a child made Taylor shudder. She’d labored hard to achieve the status she enjoyed at the law firm. Giving up now wasn’t an option. Still, what about David? Didn’t he have a right to the family he wanted? She felt so conflicted. What if her husband wasn’t willing to hang around until she determined the time felt right?

If only there was a way to compromise. She nodded. Making David a priority seemed a good start if she wanted to save her marriage. Tonight, she’d leave work early, go home, and make dinner. A few candles, a bottle of wine—David would be pleasantly surprised.
She picked the most pressing files from her desk and threw them into her briefcase, planning to peruse them while she cooked. Grabbing her jacket from the chair, she slung it over her shoulder and reached the door when the urgent buzzing of her intercom summoned her back. She leaned over the desk and mashed a button with her fingertips. “Yes?”

“Ms. Morgan,” her secretary responded, “Mr. Abernathy requests you join him in the conference room right away. The senior partners have called an emergency meeting.”

“I’ll be right there.” Taylor plopped her briefcase back on the desk. She straightened her collar and smoothed her skirt then took a deep breath.

Here is my latest review - fresh from Mind Fog:


REVIEW: Ginger Simpson has created a magnificent tale with "Sisters in Time" Taylor and Mariah are two very different women from two very different eras. In 2002 Taylor is a well educated successful attorney who is more concerned with business than with life or her husband David. Mariah on the other hand is the wife of a rancher in the 1870's and her world revolves around her husband Frank and their two children. When the two inexplicably exchange places they are forced to reevaluate their views on life. The experiences they have while living each others lives will change them both forever.

"Sisters in Time" Took me to another realm. I began to read and was transported into the story from start to finish. The love scenes were well written and tasteful, and the characters had depth and believability. I recommend "Sisters in Time" to anyone who likes to curl up with a good book and leave their life behind for a while.


Note: Sisters in Time is available in ebook format at Eternal Press and in print format at Amazon. Hope you reading the book brings you the same enjoyment I found in writing it.
Posted by Unknown at 9:50 AM

Very nice review and excerpt. Really got my attention. Right away I liked these women.