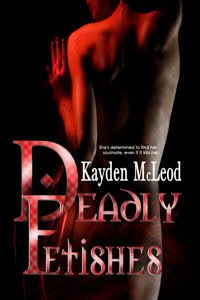 “What has gotten into the two of you?” Ryder asked when we stood, kicking aside a moaning Jonas.

“We are revenge.” My own demonic voice thundered through the room. The volume shuttered the fog floating in the air around us.

“All right then. Remind me the next time that I mouth off, of this moment. Please, and thank you.” He nodded briskly, and followed us silently when we moved through the room once more.

Ryder watched our backs, following us closely. I could taste his fear. Not of us, but what we were capable of in this perfect killing state. He seemed to know exactly what was happening, but his cautiousness told me of his shock at our strength of will.

I turned my head to the right, hearing Marcus’s enraged snarl. Sara turned with me as one, until the very end. We were inseparable. Everyone against us would die for threatening what was ours.

Marcus and Dallas were both in a low crouch across from each other, waiting for the other to attack. They were wounded, cut and bruised.

I snarled as the rather nasty cut on Marcus’s forehead, realizing someone had ripped out his eyebrow ring.

Seeing brutal and endless red, my eyes filled with blood. I screamed an insane wail that swelled in volume to fill every corner of the room.

Sara screamed beside me, ruffled because of my outburst. We were almost like birds in our actions.

Dallas’s head turned to take us in, and visibly paled. I knew we were already covered in Jonas’s blood, and he could smell it.

He would know where we’d just come from, heard the screams, never guessing who’d induced that terror, until he caught sight of us. His eyes focused on mine and ignored Marcus, seeing us as the bigger threat.

My mate stepped aside to stand beside Ryder, but he wouldn’t let Marcus come anywhere near me.

“Kelly?” Marcus whispered painfully. His fangs snapped at Ryder’s restraining hand when he moved towards me again.

Just as Sara launched onto Dallas, I stood there expressionless. While my Curse and I both recognized him, I also acknowledged that he was severely hurt.

He limped, his jeans torn and stained with dark red. It was his own, and Coren’s, and some of Dallas’s.. I whimpered in confusion when he reached for me.

“Don’t bother.” Ryder pulled Marcus another inch or so away. “Dude, all I have to say is; never piss off your fiancé..”

I leapt atop of the struggling figures, my saliva-coated fangs piercing through Dallas’s t-shirt into his chest, right above his heart.

He shrieked, gripping my hair to try and pull me off. I turned like a snake, latching onto his offered wrist to stare into his eyes. He was too scared, not even his survival instincts kicking in to save himself.

“What’s happening to them?” Marcus’s voice was a thread of a whisper, half fear and half admiration.

“I don’t have a name for it, nor have I actually seen it before. They are past reason or simple anger. I haven’t seen anything like this, especially not from human converts.” Ryder’s hand locked around Marcus’s biceps, preventing him from joining the fight.

“Marcus, you seriously have to leave them alone. At this time, they’re just as likely to strike at you, as they are them. Both of them are animals right now, and they will protect their meal until they are finished with it.” Ryder warned.

“But what if she gets hurt?” Marcus pulled at his arm again, his eyes filled with turmoil when Dallas hit me in the back of the head.

“Look at her! Does it look like pain could even pierce that thick head right now?” Ryder waved his arms in front of himself, daring Marcus to gain a brain, and lose the testosterone.

I backhanded Dallas, hard enough to knock out any human. My engagement ring caught his face, tearing his cheek wide open. I smiled ruthlessly, blood dripping from my mouth as I held him still while Sara drained him.

Still, neither of us was sated.

His blood curdling screams set the stage for the others. Confused shouts surrounded us from all sides, wondering who was screaming this painfully, and why.

I smiled viciously, my head rising from the gushing wounds. I almost felt like howling, but I was a vampire, not a werewolf.

My name being said made me swivel my head back towards Marcus and Ryder.

Sara threw Dallas’s body into the fog, and away from us. His dull grunt told me he was still alive, for now.

Marcus came to his knees in front of me, holding his hand out cautiously. He trusted me not to hurt him, not to bleed him like I had the others, regardless of the warnings from his friend.

Ryder swore viciously, and tensed to leap onto me if I snapped. He seemed to know that Marcus wouldn’t raise a hand to defend himself if I attacked. He’d rather die, than hurt me.

My head cocked to one side, nuzzling his hand that cupped my cheek. No matter what Ryder though, I wouldn’t ever hurt him.

“Are you in there my love?” He asked me, smiling sadly.

I couldn’t respond, neither mentally nor vocally, but I kissed the tips of his fingers with my blood-coated lips, before I bound away from him

If you want to read Kayden's interesting information on the celebration of Halloween, click here:
Posted by Unknown at 4:00 AM