For Some, It's always Halloween 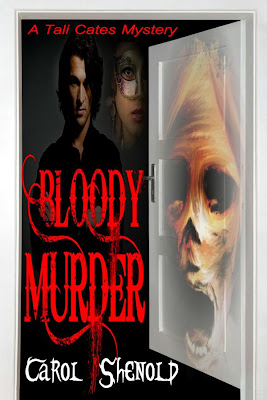 Some authors have the knack of infusing hair-raising scenes into their writing...especially my guest today, Carol Shenold. If you haven't enjoyed the escapades of Tali Cates, then here's a couple of excerpts to show you how exciting mystery can be:


In this scene from “Bloody Murder” Tali Cates visits the funeral home to see if her gift of “sight” will allow her to see Marcia’s murderer:

I stopped. “Wait. Can you show me where Marcia is? I never got to really say goodbye, and I don’t want to intrude on the family time.”

Tara hesitated. “I guess it would be all right. No one is here right now, except for me. We don’t usually let visitors go into the preparation room but let me see… wait, she’s in a closed casket, so you should be able to go in. No problem.”

We turned around to go the opposite way, stopped halfway down the center hall,and entered a plain, no-frills room with several caskets lined up in a row.

I shivered and Tara patted me on the shoulder, obviously assuming I was grieving. She murmured comforting sounds and left me alone in the room. Guilt coursed through me that I’d fooled a nice kid who was trying to be kind. Another rumble shook the room. I knew, deep in my soul, that a casket lid would open and a thing would sit up, climb out, and come after me.

I couldn’t stand there and watch the coffins for movement. I needed to open this one and touch Marcia in case I could sense anything that would help us catch whoever caused her death. I took a deep breath, reached for the lid, and opened it. I kept my eyes on the end of the casket to avoid seeing her face again.

No one had changed her clothes so she was still in her jeans. I guessed, since she Would be in a closed casket, they must have re-dressed her in the same clothes after the autopsy. I reached for the hem of her jeans, expecting another clap of thunder. Instead, the room became quieter, hushed.

I touched the denim and saw—nothing. Dark slammed into me, pushed at me. Red tinged the edges. Emotions flew through my mind—envy, fear, desire. Black emotions threatened to take over and I jerked back.

I saw no concrete images, only colors, feelings, and strong evil. After slamming closed the casket, I ran out of the room and down the hall, ran into a dead end. Wrong way—dark hall—panic—shouldn’t have come.


In another scene from “Bloody Murder” Tali and her friend Cherilyn take shelter from a storm, only to face a worse storm on the inside:


Cherilyn stood right beside me. “Look at those clouds. They’re turning in circles.”

“Shit, shit, shit. We’re going to have a tornado, and it’s not much after noon. They’re not supposed to hit until afternoon or evening.”
“Tell that to those clouds overhead.”

I scanned the kitchen and saw a door on the opposite side from the one outside.

“If it’s a cellar, I’m not going to be trapped inside a death trap.”

“Oh, don’t be a baby. It’s just a pantry but it should protect us.”

She pulled back. “But it’s dark and old and there’s no telling how many critters are in there. Besides, how do you know it’s a pantry?”

I shrugged and pulled open the door, then looked around for light. In the middle of the pentagram on the floor stood a large candle. Plucking that from its resting place might not be good but it was better than being in the dark. I grabbed it, attempting to ignore the energy washing through me.

We barreled through the pantry door and closed it. Now we were in the pitch dark with an unlit candle.

“It’s noon in October, not late afternoon in May,” I shouted. “We shouldn’t be having this strong a thunderstorm.”

“Did you tell that to the weather gods? I don’t think they’re playing by the rules,”

Cherilyn yelled back. “How about some light?”

“Do you have a lighter or something?” An abrupt flare of light blinded me as the wick of the candle I held burst into flame. I barely managed to hold onto the wax when I jumped. Thank God I’d dropped the sack of grass at the last thunderclap or I’d have a
bag of flame.

“Okay. That was just plain weird. I know you have some gifts, but lighting things with your mind?”

Shelves held the usual things for an abandoned house—dust, cobwebs, more dust, spiders, a discarded, dented can of corn. The hail, wind, and rain had stopped, or else we simply couldn’t hear them, which made no sense. Was this the eye of the storm? I didn’t remember that tornadoes had an eye; they came and went so fast.

The pantry was enormous, as were Cherilyn’s eyes. She wasn’t looking at me, but above my head somewhere.

She pointed to the wall behind me. “Look.”

I turned. Symbols covered the wall. Most pantries had shelves on at least three walls but this one was as large as a living room, and one wall was covered with hundreds of drawings crammed together, one on top of each other. They glowed with a light of their own—or took the light from the candle. I moved closer to try to identify the drawings but an immediate chill shot through me.
My hands shook, my entire body trembled, sending the candle flame jumping like a demented firefly, throwing shadows in odd shapes all over the wall. I swore the shadows moved on their own. More than anything in the world, I didn’t want to see the things that made those shadows. Fear also moved on its own, pushed into me, froze my
blood, stopping all movement, including my heart. Unreasonable fear that made me want to claw my way out of the room took over.

To see more about this amazing author's work and Tali's series, visit Carol's website.
Posted by Unknown at 4:00 AM