Imagine enjoying an evening out with your husband and witnessing his death by gunshot. You're holding his hand as his head sags to his chest. Your clothing is splattered with his blood.

But the nightmare doesn't end there. Because you deal with the grief in a manner not considered "rational," your eldest son has you declared insane and, after a court hearing, you're confined to an asylum. Hard to believe? The whole riveting story of Mary Todd Lincoln is captured in Janis Cooke Newman's novel, Mrs. Lincoln. 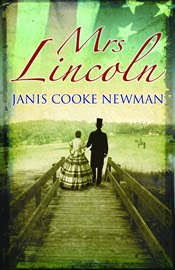 When I first looked at this novel, I shuddered. It's 565 pages long and I rarely engage my precious time in something so lengthy. The only problem I found was trying to put it down once I got engrossed in the story--tales of the horrible things that happened to affluent women of that era, how Mary Lincoln developed a taste for buying on credit, and why her purchases comforted her in her times of need.

The story revolves around the political career of Abe Lincoln, war, slavery, and the seances that Mary Todd Lincoln held, trying to connect with her dead children. Written in first person, the descriptions are vivid and real. I pictured the asylum furniture, plucked and picked apart by the mad residents, and I shared Mary's anguish at every loss in her life--especially her freedom.

I cannot imagine the myriad of emotions that must have shook Mrs. Lincoln to her very soul. The son she loved, and her only surviving child ruled her life, her visitors, and kept her prisoner in a place where she truly didn't belong. As I read the descriptions of Robert, I wondered if might have been autistic, as he shied away from touch and affection. Perhaps the condition has been around even much longer than we know.

Regardless of my mind wanderings, I was fascinated with this book. The very idea that your life can be stolen from you in a flash qualifies my review of this book for my "Spooky Stuff" month.

Kudos to Janis Cooke Newman. I'm so happy I decided to venture into such a lengthy read. It was well-worth the time spent and I highly recommend it.
Posted by Unknown at 4:00 AM

Great comment on the book, Ginger. I found it sinister and heartbreaking too. Mary's grief wouldn't raise a hair in modern society, and everyone would be sympathetic and understanding. In her own time it was enough to get her committed - the bit about her having 'an hysterical womb' really got my dander up, especially as it was most probably inept childbirth on a doctor's part that caused the problem!