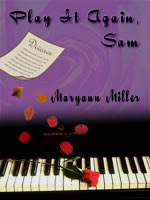 First I want to thank Ginger for inviting me to be a guest here today. What a great idea it was to devote the whole month of February to romance, and there have been some great posts to enjoy, with more to come.

When I was writing Play It Again, Sam, I had a hard time at first coming up with the perfect hero. This was my first official romance novel, then under contract then with Kensington, and I knew I wanted a central character who was different from so many that lived in popular romances. Rogues and bad boys seemed to be more common in stories at that time, possibly so the heroine could redeem them.

While that works for a lot of romance readers and writers, that isn’t what I wanted for this story.

In casting about to figure out what I wanted, I wondered; why not make him a romantic superhero? I thought about one of the things that is so endearing about my husband – he loves to plan elaborate surprises for me for my Birthday or any other gift-giving occasion – and decided to give that quality to Frank, but make it bigger than life.

Just for the record, my husband is terrific, but he has yet to match some of the things Frank does to win Sam over.

The other thing I wanted to do in creating Frank was illustrate that romance and relationships are not always just about sex, especially when two people are tentatively stepping into a new relationship. Although the attraction is there, Sam and Frank each have reasons for wanting to take it slow. When they finally do take that step into physical intimacy, I think the moment has more drama because they held back for so long. Here is an excerpt of that moment:

She slid into a chair and watched Frank amble over to the counter. Momentarily he blocked the sunlight, and in the dimness his presence loomed larger than reality. She was very aware of the soft rustle of fabric against his legs as he walked, and he trailed a faint scent of something heady and masculine behind him.

Feeling a sharp stir of arousal, she tried not to look as he returned with the coffee, but her eyes had a will of their own. They noticed the broad expanse of chest where the front of the robe fell open when he bent to pour the coffee. Instinctively, her hand reached out to touch. His skin was smooth, and warm, and...

Frank took a deep breath and put the coffeepot on the table. "Is there something else you'd like?"

He took her hand and put it back, holding it lightly against his chest. "It's okay, Sam. It really is."

She felt the faint throb of his heart, and as her fingers splayed across his chest, the tempo increased, matching the rhythm of her own heartbeat. The flicker of arousal burst into full flame, making her tingle with anticipation. She looked into the crystal depths of his eyes and saw his need reflecting back to her.

Without thinking, she rose from her chair, a silent offering to satisfy that need. A silent question formed on his face. Are you sure?

There is more to this scene, but it was too long to include in a blog. If you are intrigued, the book is available as an e-book from a number of sites, including my publisher

Now that I have told you a little about Frank and about my husband, you tell me. What are the characteristics you look for in a romance hero and a real-life hero?

Posted by Maryannwrites at 7:50 AM

Thanks for having me as a guest, Ginger. I will stop by periodically today to respond to comments.

I think it's wonderful that your husband helped inspire you when creating your hero!

I think I like the idea of a romantic hero who is a real man...someone who's down to earth and approachable. Smart and funny. But complex.

I totally agree with Elizabeth. A man has to have a sense of humor to be attractive to me!

That was a great scene.

For me, the romantic hero would have a sense of humor, as has been said, and be someone you could totally trust with your heart.

I agree about the sense of humor, and I think a sense of fun goes along with that. I tried to give Frank both characteristics as he came alive in the story, and readers do seem to like him as much as Sam does.

I agree. You have to have loads of trust to open yourself up to a man. One who recogizes and likes the real you. A sense of humor is a plus.
Nice going Elizabeth.