Why Do I Write?

Let me count the ways! First I have a cacophony of voices always screaming in my head, "Write my story, write my story." Only in sleep, after a Xanax or two, can I escape the noise. But, then I dream. I should live long enough to finish all the novels I have started in my work-in-progress folder. I wish my wallet was as thick.

Every day brings another thought, another scene, another character to inspire me. I've already written two short humorous books, but I enjoy writing third person so much more. So, I try to infuse my books with something to inspire a giggle. Beside Myself, although listed as romantic suspense, is actually chock full of fun. At least I giggled while my character showed me what she was going through at the time. Can you honestly say this doesn't make you grin? (Setting the scene....My hero and heroine have suffered an unfortunate body transfer during their first kiss and now are giving each other tips on how to handle things.) 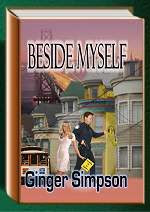 No sooner had Alex thought of Cynthia, she appeared in the doorway. “Well, I’m ready... I think.”

She was a mess. Pieces of tissue dotted numerous razor cuts on her face and she had combed his hair all wrong. “Geez, Cyn, take it easy on my face. Should we call 911 and ask for a transfusion?”

“Very funny, Alex. I’ve been shaving my legs for years, but this was a lot tougher than I expected.”

“Come here and let me show you how to comb my hair. That looks ridiculous.”

“Can I help it if you have unmanageable hair? I’m not used to dealing with waves,” she said in defense, until she eyed her own locks. “And, what do you plan on doing to mine? You certainly can’t go to my job looking like that.”

“I know, and it shows.” She looked him up and down.“Although I must say, you did okay picking out a dress.”

“No, you can’t go to work with bare legs,” she said with conviction as she turned and rummaged through her drawers.

She found a new package of nylons. “Here, put these on.”

Alex groaned. He kicked off his shoes and sat on the bed. He tore into the wrapping and held up the delicate leg coverings. “I don’t have a clue how to put these things on.”

Cynthia took them from him and demonstrated how to gather them together. The rough skin of Alex’s hands snagged the silky fabric. “Christ, Alex, don’t you ever use lotion. Your hands feel like sandpaper.” She wrestled with the nylons. “Like this,” she said as she handed them to him.

Not at all used to his new fingernails, Alex did further damage as he mimicked her actions.

She grabbed his hands and made him stop. “Take your time, go slow...and about the lotion. Don’t let my hands get like these.” She
rubbed his palms together, creating a grating noise.

“Yeah, like my biggest worry is hand lotion right now.”

After several attempts and a few more snags, Alex had wriggled his hips enough to get the waist where it belonged. “I never knew what you women go through.I am so glad I was born a male.”

He dipped his feet back into the shoes and asked, “Satisfied?”

“Not hardly! Let’s do something with that hair.”

He followed her into the bathroom and sat on the commode while she gave him styling instructions. He rolled his eyes and acted like he cared.

She toyed with one last stray wisp. “Okay, that looks pretty good.”
She reached for a tall can. “Close your eyes while I spray.”

Obviously knowing her own hair, she administered a hearty dose of hair spray. “There! It’s actually easier to do my hair from this perspective,” she said as she stood back and admired the finished product.

Alex went into a coughing spasm. “Are you trying to asphyxiate me?”

She used her new-found strength and pushed him down. “There is no way you are leaving this room without at least blush and mascara.”

“Oh Christ...if I must.” He closed his eyes while she worked her magic.

Cynthia hunched over him as she coated his lashes.“Quit blinking. This isn’t as easy as it appears.”

“Why couldn’t you be a natural beauty?”

“Watch it, buddy.” She stood back and again surveyed her handiwork.

“You look fabulous. A little lipstick and you’re good to go.”

I wrote this book several years ago, and I really haven't pushed it as much as I should have. I really had fun with this one, and it received great reviews. Now looking back, if I re-wrote it, I would apply all the things I've learned and it would be an even better read. Hmmmm! Admonishing self...Don't you dare...you already have enough on your plate to choke a horse.


Special thanks to Joe Average Gets Fit for letting me "borrow" one of his creative pictures.
Posted by Unknown at 4:00 AM

Email ThisBlogThis!Share to TwitterShare to FacebookShare to Pinterest
Labels: Beside Myself, Ginger Simpson's Blog, Romantic Mystery, Why Write, Writer's Exchange

This excerpt is absolutely fantastic!!!! It was such fun and really well written!! KUDOS!

Loved it too, Ginger.You do contemporary light comedy really well. Why haven't the Screenwriters Guild discovered you yet?

Loved the excerpt, Ginger. You write contemporary as well as historical, how talented you are.

I always have characters in my head, too. Hmmm? Ever wonder about that?

Enjoyed the excerpt, Ginger. You do have a nice touch with the humor.
Like you, I also have a huge file of story ideas. I think I will make a special codicil to my will giving that folder to one of my kids with instructions that they are to finish each and every one that is left when I die.

Quite funny! Enjoyed it, Ginger!

Love your sense of humor, Ginger. I'm glad you write, too.

This excerpt is, as the Brits say, "spot on"!

I think you should do more marketing of this one--it really showcases your talents as a humorist.

Love it, love it. Made me smile.

This is fun! I hope she used plenty of lotion and made his hands as smooth as butter.