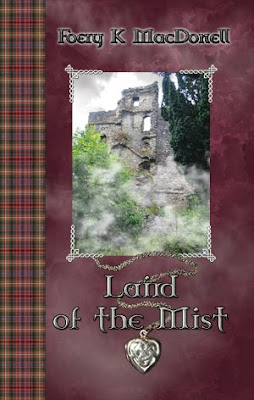 Laird of the Mist is the first in a series of three books which chronicle the MacDonell family through the Highland Clearances in Glengarry, Scotland.

Laird Carrick MacDonell believed he fought well at the Battle of Culloden Moor in 1746, but not well enough. Having lost most of his clan as well as his beloved pregnant wife, Jenny, who had come to the battlefield to aid the wounded, he is a broken man. To assuage his pain, he seeks the assistance of a witch to mix him a potion so he can take his own life. Instead, she informs him that his wife is reincarnated in 2009 and she sends him through time to find her.

Carrick arrives in 2009 and finds Jenny, now Caitriona MacPhail. Believing him to be a reeanctor from a Highland games, Cat puts no stock in his story and turns him over to her Scottish grandfather, a retired doctor who believes Carrick's tale. Cat eventually remembers Carrick and they are wed in Scotland. Cat is accidentally transported back to 1746, two days before Cumberland wreaks destruction on the glen. Carrick and Cat's grandfather and sister find a way to travel back to 1746 to save her. They arrive amidst Cumberland's butchery and begin to pick up the pieces of their lives.

Laird of the Mist is unique among Highland novels in that Laird Carrick MacDonell is one of the few Highland lairds who does not evict or cause his tenants to emigrate, nor clear his lands in favor of sheep. Instead, he continues to protect his people, raise Highland cattle and fight excise men against discovery of his distillery. He manages to keep family and clan together in Scotland despite every attempt to destroy their traditional way of life.

Read an excerpt from Laird of the Mist.

Time travel and Scottish battles in the old world. A very temping post. Sounds like a winner to me.
Good luck.

I love the cover for Laird of The Mist! I love books about time travel and anything to do with Scotland, so I am definately reading this book!

This sounds like a tear-jerker...I've gotta read this story. I love stories set in Scotland so that's an added bonus.

btw you emailed me about your blog by way of the BWL site.