Wow, a whole week has passed since I last posted.  With all the electrical storms, tornado warnings and watches, I've been distracted from anything having to do with writing.  My prayers are with those in Alabama and other states/cities who weren't as lucky as we were this time.  (Did you notice how many "w" words are in this paragraph?...Wow, whole, week, with, warnings, watches, writing...) 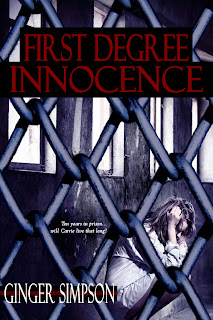 My six sentences this week come from a recent release, First Degree Innocence.  Carrie Lang has been wrongfully sentenced to ten years for a crime she didn't commit.  Her appointed public defender failed her miserably. With no family and her extra cash spent on previous bail, how can she convince anyone of her innocence?

Carrie's cheeks burned, but she did as she was told.  With her eyes squinted shut, she turned her face away, trying to halt the sobs wracking her insides.

"Okay, now bend over and spread 'em."  The matron's snicker was the final stab of humiliation.


Aghast, but shaking with fear, Carrie bowed at the waist, letting her hands dangle just above her toes.  Welling tears now fell, splashing against the darkly tiled floor.

First Degree Innocence is published by Books We Love Publishing Partners and available at Smashwords and on Amazon.

Oh, I read this book and can't recommend it enough!! Great six, Ginger.

Poor Carrie! You portrayed her anguish so well. Great six.

OOO I can feel her humiliation!

Oh, love it! I like the tears hitting the floor image.

I feel her pain and humiliation.

I am so repelled by her humiliation I'm going to have to buy and find out what happens. :)

Great job on portraying her feelings! Sounds like an interesting read!

Wonderfully written. What a terrible experience!

What a great premise for a story. You did a good job showing Carrie's humiliation and fear, as well as the chilling setting. I especially liked "splashing against the darkly tile floor." Good job.

Scary. What a moment captured in just six sentences.

Stark portrayal of her pain and helplessness.

Best of luck with the release!

Powerful six. What a humiliating and frightening experience for your character.

You did well to darken the tone.

Loved your descriptions, this was such a vivid scene, and I really felt for Carrie, bless her.

And thank goodness that crazy weather seems to have settled xx