Kickin' It Off- Welcome, Roseanne Dowell 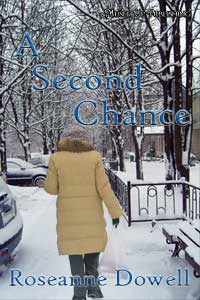 Hi, Everyone,
I’m Christine Rollins (The heroine in Roseanne's story). Let me tell you a little about myself. I’m ... uh… let’s just say a bit past middle-aged and recently divorced. Okay, divorced for two years, that’s fairly recent.
My friends and my daughter have been trying to fix me up with every available man they know or meet since my divorce. Like I can’t live alone. They have no idea how much I’m enjoying my new found freedom. Men complicate things. Besides,  I don’t need a man to feel complete or satisfied. Sure it was rough going for a while. After the divorce I was pretty torn up, who wouldn’t be? But I’ve recovered now and I have a good life.
Between my job, classes at the local college and my family, I lead a very fulfilling life. Thank you very much.
At least I thought I did until I came home from Florida after a visit with my son. My daughter introduced me to Steven Payton, her husband’s uncle who just moved back to the states from New Zealand.  Sexy hunk. He reminded me a bit of my father with his drooping mustache.  Persistent too, I soon discovered, and very attentive. More so than my ex ever was. He actually listened when I talked about school or work. He asked questions too.
Everything was moving along just fine, until my ex showed up one day, unexpectedly. Poor Steven looked confused as we stood in the driveway and Tony took over the conversation and whisked me inside, leaving Steven standing outside in the cold.
I was floored when Tony asked me to take him back. For two years I’d been waiting to hear those words. Prayed for them. Suddenly, he stood there in front of me – begging me for a second chance. Tony never begged for anything.
Well what could I say? After all we’d been married for 35 years; he was the father of my children. Didn’t he deserve a second chance?
Second Chance will be released this month.
Visit me at my website – www.roseannedowell.com and/or my blog http://roseannedwellauthor.blogspot.com

I don’t need a man to feel complete or satisfied.
Love this line and never a truer word spoken. I only hope more women get the message. Not trashing relationships but hoping young girls will realize their own self-worth and
not sell themselves short. Sounds a wonderful story, Roseanne

I always say people deserve a second chance but not at the expense of my well being and mental state.

I agree with Viviane, great line and so true. Who needs a man to feel complete? sounds like a great read.

I have a soul mate in my husband and best friend. He is a man so I'd have to say I need him. In contrast I have an abusive ex-husband who I was blessed to escape from. As for the situation in Second Chances...if my soul mate left me even for a day, the damage of that would be too much to repair in my mind as trying to repair something after sharing the magic would be to heartbreaking for me personally but others have successfully done it.

Not sure I'd give him a second chance.

Thanks everyone for your comments. I've been married to mine for almost 50 years.

Christine sounds like a delightful character. She's spot on and I hope she rubs off on many girls out there. Great job Ros.
C.K. Volnek

Sounds like a deep, thoughtful message in this novel. I can't wait to read it.

I can sympathize over the divorce. Been there before and yes, the freedom of being single is great. I'm married again and this one's a keeper, but I enjoyed your post and yes, we don't need men to feel complete.

Rosanne is the woman of the day on the net!

Reminds of the old Feminist saying: A woman without a man is like a fish without a bicycle.

Roseanne, your book has just gone to my 'to read list' and I don't usually read romances. Great character. Great post. Roll on September!

What? Another great story from Roseanne? Congratulations! I believe in second chances too.

Congratulations on the release!

Thanks, everyone who left a comment. I enjoyed writing A Second Chance, mostly because the heroine isn't a sexy young thing. I like books with older heroines.