That Which Does Not Kill Us...

Before I even started Hattie's Hero, I had an stock image I'd cherished for quite some time that I'd purchased for use.  Years ago, I had a mishap with a publisher, and in the blink of an eye,  my new cover, featuring that image, was stripped from me, and I was banned from the group.  I still can't tell you what happened except that my name was mentioned in an email that was sent to the loop by mistake.  Nothing big...just nice support from other members who realized the moderator didn't set a welcoming tone.   I was new to the group and hadn't had much experience, so the whole thing left a really bad taste in my mouth, and that of the several others who got caught up in the whole mess.  Luckily, the phrase, "That which does not kill us makes us stronger," is true.  I almost threw in the towel, but I didn't.  I'm still here.  :)

Last year at the Muse It Up Conference, I used that awful experience to conduct a one-day workshop on the Pitfalls of Publishing.  I urged, and still do, all authors to research their publishing choices before they sign on the dotted line.  Getting out of a bad contract can be more work than getting a divorce,and there are some publishers who aren't really ready to work on behalf of those they sign.  At best, making a bad deal can make you question your own worth. Thankfully, today you have even more choices because the world of e-readers has encouraged many talented writers to self-publish, and the stigma involved with doing that has faded.  I'm considering that option for Hattie's when I've finished.

I've had three bad experiences.  Not because I'm a bad risk, but because those who contracted me didn't have their ducks in a row and should never have gotten into the business. I fault myself because I should have done what I'm urging you to do. I'm not naming names, just warning new authors who are considering going the contracted route to talk with those in the know--the authors who have gone before you.  If they signed, are they happy?  Would they sign again?  Authors who are involved with the publisher are you best source of real information. They probably won't offer, but when asked, I've never been denied "the scoop."  Don't rely on a second-hand gossip; there's too much of it circulating.

Another helpful venue is using your search engine.  History really doesn't die.  Google (Chrome, IE, or whatever you use) the name of your prospective publishing company and the people involved.  You can find tons of information, good and bad.  I've found that places like Piers Anthony and Preditors and Editors can be just as harmful as they are helpful because they often carry reports from disgruntled authors or very little information at all, as evidenced by Muse It Up Publishing on the P&E site, which is one of mine and seems to be thriving. No matter where you go, you'll find at least one, so don't  rely on talking to just a solo person...expand your horizons.  It's your life, and trust me, you want to be in control of it.

After ten years, I'm still learning the process.  I don't know everything, but I've certainly learned a lot, and there are things I definitely would have done differently.  Number one...I wouldn't have let myself be bullied about using an I-Stock photo that anyone can purchase.  Threats of a lawsuit turned me timid, and I gave up something I loved...not once, but twice.  Well, not again.  I'm happy to share the beautiful cover my talented friend, cover artist, and fellow author, Dawne Dominique, created for me. She's amazing, talented, and reasonable, and probably really busy since she's done all the majority of my Eternal Press Covers and those of others there.

Presenting with great pride and anticipation... imagine a drum roll.  Now all I have to do is finish the book.  *lol*  Yes, it's another western historical, this time using YA characters who grow into their own through the experiences they share. 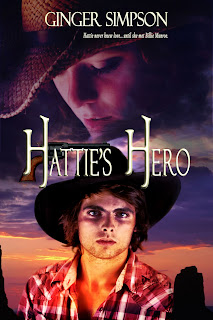 Hi Ginger! I'm glad YOU are thriving, as is only fitting. I think you give a wealth of info on Dishin' It Out and I hope new authors are learning something from your experiences. I know I have and I'd hate to be hanging since I was 'new.' For the record, MuseitUp Publishing has done right by me and by all accounts, nearly everyone I know. Because people often like to blame someone else for a rainy day, I tend to pay attention to what those I know say. Like you, Toots!

Ginger, I love the cover, but didn't realize Hattie's Hero was YA. I miss critiqueing it, you had the heroine so true to life. I really enjoyed her.
I'm grateful you hung in there or I might never have met you and you've been a wonderful mentor to me as a writer. And you steered me to a good publisher.