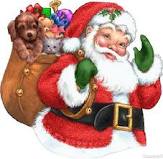 I’m only 54 years old so I tried to get someone bigger than me to write this for me. They all declined.

I should write this letter asking you the great requests of the Christmas season. But you know, I’m just not so sure.

It’s not that I don’t believe in you in the sense of your spirit of generosity and ho-ho-ho and all the fine qualities you expound for as long as you’re around. It’s just that..

If I ask you for peace for all, you can’t deliver that.

If I ask you for brotherhood for all, you can’t deliver that.

If I ask you for serenity for all, you can’t deliver that.

If I ask you for an end to poverty to prejudice, to backstabbing, to hate, to exclusion, to intolerance, to apathy, to cruelty to loneliness, to aggressiveness and violence or to any of the other abhorrent characteristics of unfeeling humanity you can’t deliver, can you?
All right, Santa, because you’re such a nice guy I’ll give you this much.

Your red suit and white beard and belly laugh - not to mention your belly - make people feel good. They smile when they see you in the mall and think of the accepted folly of you flying in a reindeer-pulled sleigh around the world in one night, without a passport no less. Well, except for that 3-year-old on your lap the other day who was absolutely terrified by that red suit, white beard and especially the belly laugh. Has your knee recovered from the kick he gave you trying to break free?

People enjoy pretending to be you or one of your industrious elves. I’ve worn the red suit and fake beard myself and looked into faces that while I ho-ho-hoed were dissolving into belief where before there was considerable doubt about your existence and meaning.

Pretending to be you made me feel sustained and worthwhile for a while. And, like many others, I grasp that feeling anew when 1 sign “From Santa” and not my own name to a gift I give.

But Santa Baby your time is seasonal and your effect measured in mere weeks, days and hours and in songs people don’t want to hear anymore after midnight Dec. 25.

How much more glorious would it be if every person who looks to you even for the moment would look wholeheartedly to the one whose birth Christmas Day celebrates? Even if at the same time denying the deity of Jesus, what would happen if they truly embraced the teachings and the life and the examples of Jesus?

Wouldn’t the world be at peace, Santa, because there just wouldn’t be any need for the things that fuel war?

Wouldn’t brotherhood thrive, Santa, because that would be the only accepted way of treating others?

Wouldn’t people care enough about each other, Santa, to eliminate poverty?

Wouldn’t people no longer feel a need for aggressiveness or greed or violence, Santa, to make themselves feel safe or secure?

And wouldn’t cruelty be replaced, Santa, with kindness and forgiveness and sacrifice for others?

Following the life of Christ is indeed hard for an individual, Santa. Yet the good in the result for the many would be beyond measure.

So, Santa, don’t take offense. While you’re here, while you last, I’ll enjoy your company. I’ll sit up Christmas Eve and watch the fireplace for your entrance, if you want. Although the last 43 years 1 have to admit have been a little disappointing in that regard.

My Christmas wish, though, my real Christmas wish is that more people embrace the Life that could truly make all those worthwhile Christmas wishes spoken by so many lips come gloriously true.

How about it, Santa?
Love,
Jim
PS. Milk and chocolate chip cookies, my house, Christmas Eve. At least there better be.
****

My special thanks to Jim Hill for so graciously sharing the spirit of the season with me.  I asked his permission to post this today, since his letter to Santa so eloquently sums up what most of us wish for.  To find out more about Jim, the author and columnist, I add his email signature line for your convenience.  He's a treasure:

WOW, you really snuck up on me with that end, LOVED it. Very very very good! Thank you and have a very MERRY CHRISTMAS